What: Shares of ENSCO (OTC:VAL) jumped more than 11% by 11:30 a.m. EST on Friday. Driving Friday's buying was a delayed reaction to Thursday's fourth-quarter earnings release and the announcement of a reduced dividend.

So what: On Thursday shares of ENSCO were hammered in response to earnings and the dividend reduction: 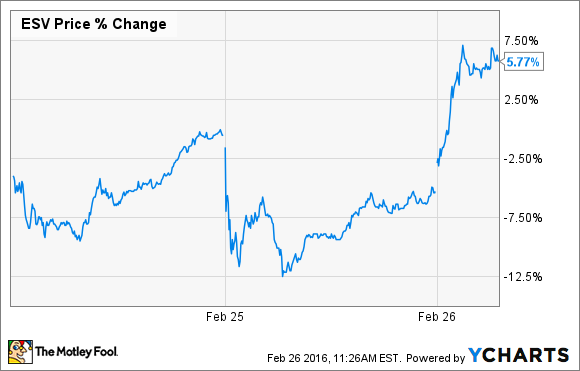 However, after mulling over the results and the implication of the dividend reduction, investors are singing a different tune Friday. That's because all things considered the results were pretty good. That's exactly what analysts at Citi tried to point out Thursday. They noted that the company's adjusted earnings of $0.88 per share trounced the consensus estimate of $0.71 per share. That was largely due to cost controls, which contributed to $0.10 per share to the earnings beat, as well as due to lower taxes.

Further, they noted the dividend reduction from $0.15 per share to a mere $0.01 per share would add $130 million to its retained cash flow per year, which will help shore up its liquidity so that it can maintain a solid balance sheet.

Having said all that, they're still not wildly bullish on the stock, rating it only a neutral. However, that extra liquidity does further improve its staying power during the downturn, which will enable it to capture the upside when the offshore market eventually recovers.

Now what: ENSCO is doing the best it can in an awful offshore market. That's something that went unnoticed Thursday after investors reacted to the company's dividend reduction. That deep cut, however, is the prudent move given that the offshore market is a long way from recovering.