Stocks ended the trading session higher today despite spending much of the day in negative territory: 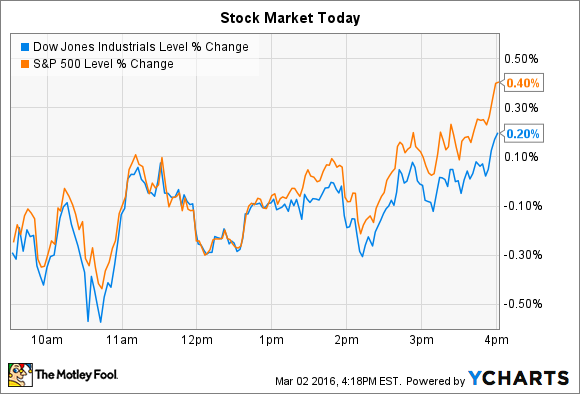 In economic news, the monthly ADP National Employment Report revealed strong job growth as the economy added 214,000 private sector jobs last month, beating economists' projections of 185,000. That upside surprise suggests the official job creation number, due out before the market opens on Friday, might not point to a growth slowdown in the U.S. economy, as many investors have feared .

Monsanto's lowered outlook
Monsanto's stock fell 8% on heavy trading volume after the agricultural products titan sliced its business outlook for the year. Management now sees earnings weighing in at $4.75 per share in fiscal 2016, down sharply from the $5.35 per share they had forecast in early January. Monsanto also lowered its cash flow projection down to $1.5 billion from $1.7 billion .

The major headwinds that have been hurting business lately, particularly slumping margins resulting from lower commodity prices, haven't let up, the company said. And at the same time two new issues have recently cropped up: regulatory delays and increased generic competition. "Today, the macro-environment is proving to be even more challenging," CEO Pierre Courduroux said in a press release.

Management believes these problems are short-term in nature and don't impact Monsanto's core business strength. "It's easy to focus on the current downturn in the agricultural cycle," Corduroux said, "but as the leader in the industry, we are in a unique position to take advantage of the inevitable rebound and accelerate the delivery of integrated solutions within the industry."

In the meantime, Monsanto is focused on making continued investments in its product pipeline, achieving a lower cost profile, and allocating capital more efficiently. With help from these initiatives, executives are confident that significant profit growth will return to the business beginning in the second half of this fiscal year.

Darling Ingredients' efficiency gains
Rendering and feed ingredient specialist Darling Ingredients soared 26% higher as its fourth-quarter earnings results weren't nearly as bad as investors had feared. As a result, the stock jumped into positive territory on the year, but remains down by roughly one-third over the last 52 weeks.

Q4 sales slumped by 19%, yet net income improved by 14% to $78 million. The key contributors to that efficient performance were Darling's food and fuel operating segments, which both posted strong gains. Food's profit margin jumped to 14% of sales from 10% on strong pricing and sales volumes, and the same trends helped the fuel segment improve to 29% operating margin from 24% last year. "Our team delivered solid execution led by international businesses with growth and cost saving efficiencies achieved around the globe," CEO Randall Stuewe said in a press release .

The company is seeing encouraging early signs of rebounding growth in the industry. "Our current view is that we will see improved conditions for fats and oils demand as we proceed into spring," Stuewe said. Whether that uptick leads quickly back to sustainable growth or not, investors can expect Darling to keep prioritizing debt repayment over the next year. Management spent $118 million paying down its $2 billion debt load last year and target removing another $150 million in debt in 2016.