Macau's gaming recovery took another step forward in February, and gaming stocks are starting to price in more optimism than we've seen in two years. Monthly gaming revenue was down only slightly to $2.45 billion, as comparisons got easier and a slow recovery started to form.

This followed fairly bullish remarks from Sheldon Adelson at Las Vegas Sands (NYSE:LVS) and Steve Wynn of Wynn Resorts (NASDAQ:WYNN) when they reported fourth quarter earnings. Wynn said January was "our best month in a long time," and Adelson sees "stabilization in gaming revenue trends." Along with Melco Crown (NASDAQ:MPEL), the most Macau-centric U.S. traded stock of all, they have a lot riding on a recovery.

Is a recovery here?
For months, there has been hope that Macau's gaming revenue was hovering near a bottom. You can see in the chart below that for at least the past six months, there have been up and down gyrations around the $2.4 billion per month level. 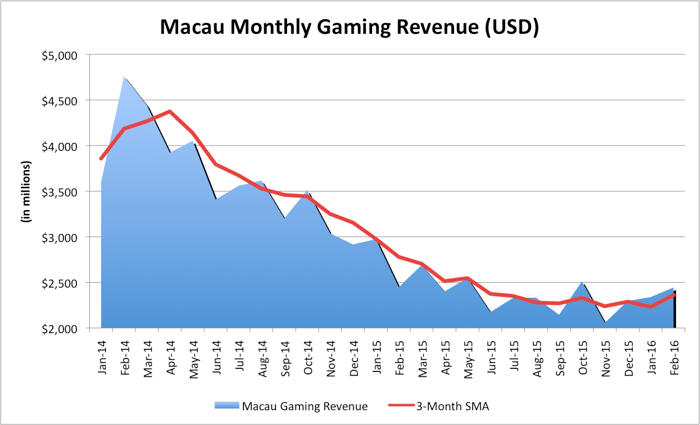 An encouraging trend in the recent numbers is the three-month moving average (seen in the chart), which hasn't been this high since June 2015. The recovery has extended beyond just a single good month.

The bad news for gaming companies
Improving gaming revenue would be great on its own. You can see that revenue at Las Vegas Sands, Wynn, and Melco Crown declined rapidly, which hurt profits across the board. Added demand for their offerings is a welcome change. 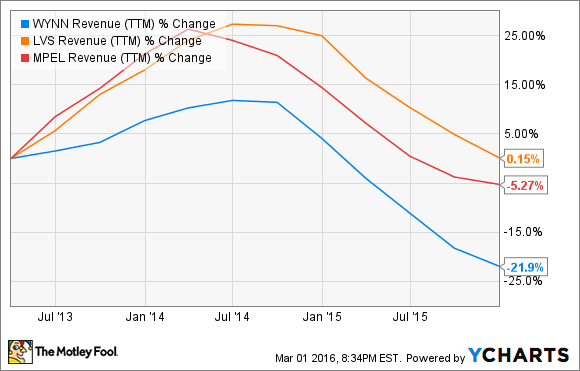 However, there's also an increase in supply coming to Macau, one that the market probably can't absorb. Melco opened Studio City last year; Wynn will open Wynn Palace in June; and Las Vegas Sands' The Parisian is due later this year. Those three resorts would each like 500 gaming tables (Studio City was only allocated 250 for 2016), which could eventually add 1,500 tables to Macau's total inventory of about 6,000 -- from just three properties. That's on top of new resorts or expansions from the three other gaming operators, Galaxy, MGM, and SJM.

Given the added supply, an increase in demand in Macau is necessary just to keep resort revenue and earnings flat. The challenge now is that the uptick we've seen recently is a fraction of what's needed to absorb that supply. Reaching the bottom of Macau's gaming market is positive, but there's a supply challenge coming that could negate the potential gains.

Bet carefully
It will be important for investors to keep an eye on how these trends move in 2016, because if the recovery falters, we could see gaming stocks take it on the chin once again. Long-term, Macau is a very profitable market for gaming companies, but volatility is ruling the day in the region, and the road ahead is still rocky.