February proved to be another roller-coaster month for investors. The S&P 500 cratered in the first few trading days of the month, shedding more than 5.5% of its value at its lowest point, but then it came roaring back to life as the month progressed. The index ended up finishing up the period total loss of 0.05%, roughly flat with where it started.

Healthcare investors had to stomach an even worse ride during the period, as many of the most popular exchange-traded funds that focus on the sector dropped more than the index last month. It was such a rough month for healthcare-focused investors that the sector's best-performing ETF -- the Health Care Select Sector SPDR ETF (NYSEMKT:XLV) -- still posted a loss of 0.51% for the period, which lagged the returns of the index. 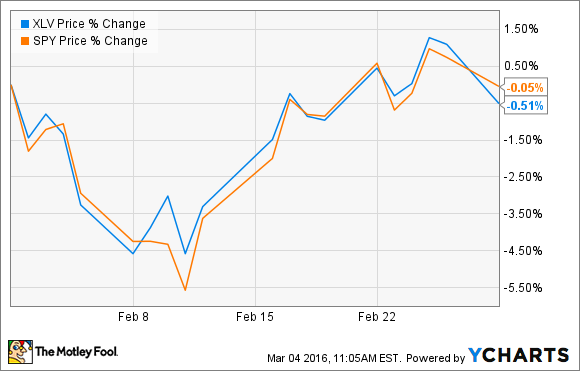 So what's going on inside the Health Care Select Sector SPDR ETF that helped it hold up better than most other healthcare ETFs this month?

Cracking it open
With more than $12 billion in total assets, the Health Care Select Sector SPDR ETF is one of the biggest and most-popular healthcare ETFs out there. The objective of this fund is to closely track the performance of all of the healthcare stocks that are held within the S&P 500 index, and this fund's strategy is to weigh its holding according to the market cap of the companies in the index.

Here's a look at the fund's top 10 holdings:

This fund's decision to weigh its holding by market cap keeps the majority of its assets held in just a handful of the index's biggest names. Its top 10 holdings currently comprise more than 55% of total assets.

What went right this month?
A handful of the fund's top holdings produced market-beating returns this month, but the two best-performing companies from this cohort were Gilead Sciences (NASDAQ:GILD) and Allergan PLC (NYSE:AGN). 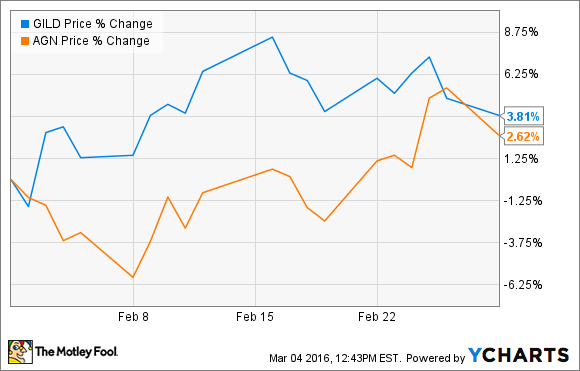 Gilead Sciences' stock got a boost during the month after it produced a solid fourth-quarter earnings report. Revenue came in at $8.5 billion, and adjusted quarterly profits per share were $3.32, both of which far surpassed the market's expectations.

Beyond its earnings, Gilead announced that it will ramp up its capital returns program. The company raised its dividend by 10% and added another $12 billion to its existing share-repurchases  program. The new authorization will begin when the company's existing $15 billion repurchase program is exhausted, which could happen as early as this month. With Gilead's stock trading for less than 8 times trailing and forward earnings, it looks like a great time to meaningfully reduce the share count.

Allergan's stock also got a shot in the arm this month after the company reported an upbeat earnings report. Revenue at the pharma giant jumped 74% to $4.2 billion, and adjusted earnings per share were $3.41 for the quarter, both of which were ahead of what Wall Street was looking for. The enormous jump in the company's top line came largely from last year's $66 billion megamerger with Actavis, but the company's legacy products, such as Botox and Restasis, continue to grow nicely.

Allergan also confirmed that its pending $160 billion merger with Pfizer is still on track to be completed in the second half of the year.

An ETF to add to your radar
The Health Care Select Sector SPDR ETF has a lot to offer investors. It provides broad-based exposure to a growing industry, and its expense ratio of only 0.15% is about as cheap as ETFs come. For that reason, I continue to believe that this ETF is a great choice for investors who want to increase their exposure to the healthcare sector but don't want to go through the trouble of picking individual stocks.