What: Shares of Carbo Ceramics (NYSE: CRR) jumped 29% in February after announcing that one of its customers had successfully used one of its specialty proppants in oil and gas drilling. This news lead to the company's shares getting gobbled up by hedge fund managers speculating on the implications of this development.

So What: Before getting too excited about last months price jump, let's put it in a little context. Shares of Carbo Ceramics are still down more than 85% since June of 2014 when the oil price crash started to take effect. So a 30% jump at today's prices isn't putting a huge dent in that recovery. 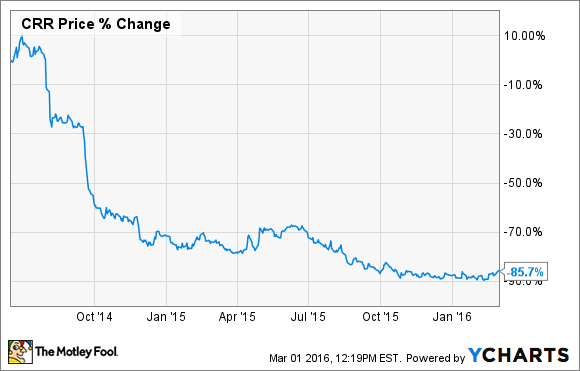 This month did provide a little bit of good news, though. As previously noted, on February 2nd, Carbo announced that one of its customers -- CONSOL Energy (NYSE: CNX) -- had used one of Carbo's specialty ceramic proppants for some higher pressure wells deep in the Utica formation and was generating better well economics than traditional sand. This is important for Carbo because these specialty ceramic proppants have much higher margins than traditional sand proppants. As the oil and gas industry has cut back on spending, these specialty products can be cast aside for cheaper alternatives. If this test product can improve well economics, though, then Carbo might find a market for this product.

The other piece of news that got the market excited was the news that Balyasny Asset Management had taken a 5.16% stake in Carbo Ceramics as of its most recent 13G filing. The company has clearly struggled recently as drilling activity across the US has declined, but if oil prices were to recover quickly then Carbo Ceramics could see its prospects turn around just as quickly.

Now What: It's important to remember to keep this recent price jump in context. A 30% bump might feel good for investors that have been shellacked by this stock for close to two years, but the company itself is still facing an extremely challenging market in 2016. Few industry experts and executives foresee a major rebound in oil prices coming very quickly, and it will take even longer before drilling activity jumps again. Knowing this, it may be best to hold out on making any decision about Carbo Ceramic's stock.