The energy midstream giant rises to the top in most metrics that matter.

Kinder Morgan (KMI 1.04%) is by far the largest energy infrastructure company in North America. Not only does it own the largest natural gas network on the continent controlling over 69,000 miles of pipelines, but the company is the largest independent transporter of petroleum products and carbon dioxide as well as the largest independent terminal operator. That said, while size is an important place to rank at the top, investors are more concerned with the company's financial rankings. Here's a closer look at where it ranks on a couple of key financial metrics.

Financial scale and dividend safety
There are a boatload of different financial metrics that investors use to rank energy midstream companies like Kinder Morgan. However, two of the most important are security of cash flow and security of investor distributions. These are two metrics where Kinder Morgan ranks best-in-class as we see on the slide below: 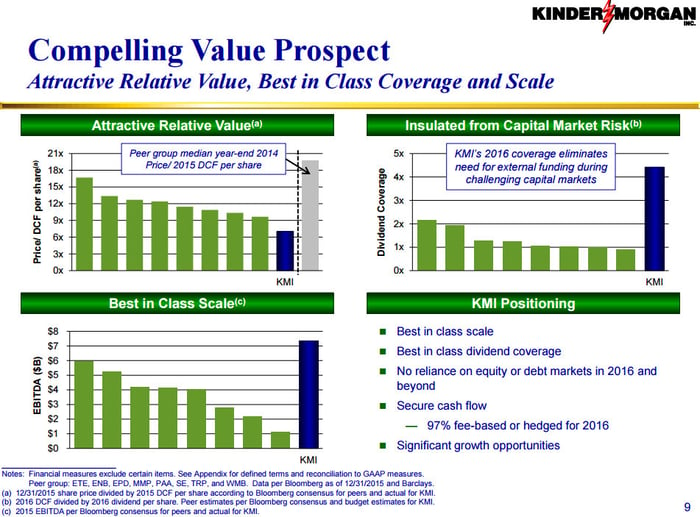 The first chart I want to point your attention to is the one in the bottom left-hand corner, which shows that Kinder Morgan generates the most cash flow in its peer group. While that is partially a function of its large size, it is worth noting that this cash flow is rock-solid with 97% of it backed by fee-based assets or commodity price hedges. That's a better rate than peers Enterprise Products Partners (EPD 0.68%), Magellan Midstream Partners (MMP 0.54%), and Williams Companies (WMB -0.21%) which all are all in the mid-80% range for cash flow backed by fee-based assets and right in line with Enbridge (ENB 0.79%) and its 95% fee-based portfolio.

The other chart worth noting is the one on the right-hand side of the above slide, which shows the dividend coverage ratios of Kinder Morgan versus its peer group. Now, the primary reason why Kinder Morgan currently leads its peer group is because it recently reduced its dividend by 75%. That said, given its current robust coverage ratio, it suggests that the reset dividend is very safe, which can't be said about most of the rest of its peer group. That's because half its peers have a coverage ratio that is at, or below, 1.0 times, meaning those companies are paying out more than they are earning, which is a sign their dividends might be cut.

Balance sheet and credit rating
Cash flow metrics really only tell part of the story so ranking high on those lists might not matter if a company ranks lower on credit-related metrics. Here's a snapshot of the credit metrics of Kinder Morgan and its peer group:

Having said that, the primary reason why a downgrade was even on the table was because Kinder Morgan's debt-to-EBITDA ratio had started to grow to a worrisome level. While it has limited exposure to commodity prices, that exposure pushed its debt-to-EBITDA ratio all the way up to 5.9 times at its peak last year, which is what caused its credit rating agency to change its outlook from stable to negative and warn of the potential for a downgrade. While that ratio is on par with those of Canadian midstream companies TransCanada and Enbridge, there is less credit worry with those two because their dividend payout ratios stand at 2.0 times, which is double what Kinder Morgan's was prior to its dividend reduction, leaving them with lots of excess cash flow to protect their credit profile.

Investor takeaway
Kinder Morgan ranks pretty high when it comes to cash flow metrics both in terms of the overall size of its cash flow as well as the stability of that cash flow due to the strong foundation provided by its fee-based assets and hedge portfolio. That said, it ranks much lower on the credit side, with its credit rating and leverage ratio both very close to the bottom of the pack. That's a ranking the company needs to improve, which was a big reason why it needed to reduce its dividend.