The drugmaker's stock caught a cold in February, but it may be setting up for a healthy rebound. Here's why. 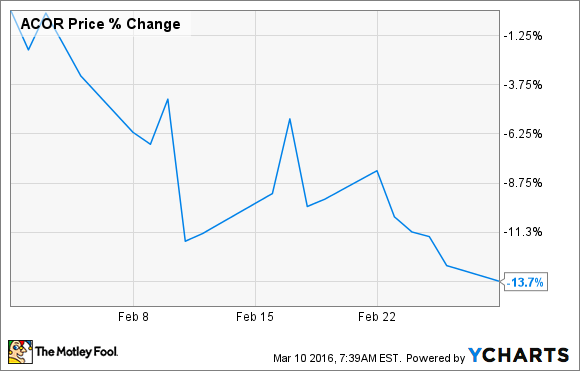 What: According to data provided by S&P Global Market Intelligence, Acorda Therapeutics (ACOR -1.82%) -- maker of the multiple sclerosis drug Ampyra -- saw its shares fall by nearly 14% in February. The drugmaker's shares were hurt last month by its fourth-quarter and full-year earnings release, where the company announced that its R&D expenses jumped by 69% for the quarter compared to the same period a year ago, and by 103% for the entire year.

So what: This double-digit sell off occurred despite Acorda reporting a healthy 11% rise in revenue for the quarter and a 22% increase in total annual revenue -- reflecting the market's overwhelmingly negative view of drugmakers at the moment. The broad-based iShares Nasdaq Biotechnology ETF also turned in a poor month in February, dropping by more than 5%.

Now what: Acorda is in the midst of an ongoing battle to defend Ampyra's suite of patents -- with the United States Patent and Trademark Office Patent Trials and Appeal Board reportedly initiating an inter partes review for four out of five of the drug's Orange Book-listed patents. The good news is that these types of reviews rarely lead to major changes regarding a drug's period of market exclusivity, and Acorda has been successful at defending Ampyra against similar challenges in the past.

So, while Acorda's stock may remain volatile due to this particular risk for the time being, I think this drugmaker will probably turn out to be a long-term winner. Perhaps the bigger issue is the market's negative sentiment toward biotechs and biopharmas in general. When it does turn positive, though, I expect Acorda's shares will recapture some of their former glory, particularly given that the company's annual revenues are projected to grow by another 7.9% next year.

George Budwell owns shares of iShares NASDAQ Biotechnology Index (ETF). The Motley Fool has no position in any of the stocks mentioned. We Fools may not all hold the same opinions, but we all believe that considering a diverse range of insights makes us better investors. The Motley Fool has a disclosure policy.