Please ensure Javascript is enabled for purposes of website accessibility
Log In Help Join The Motley Fool
Free Article Join Over 1 Million Premium Members And Get More In-Depth Stock Guidance and Research
By Jeremy Bowman - Mar 18, 2016 at 11:24AM

Let's break down two of the biggest brands in sports apparel to see which is the better value for your portfolio today.

The sports apparel world has been lucrative for investors in recent years, and there's no indication that is set to change anytime soon, with developments like wearable technology and the athleisure fashion trend taking hold.

Two of the bigger companies in sports apparel are Under Armour Inc. (UAA 1.70%) and Adidas (ADDYY 2.50%). One is an American upstart that has steadily grabbed market share from the major players, thanks to its innovations in fabric and wearable tech. The other is a European giant whose strength in soccer fed its growth into a global brand across multiple platforms.

Today, we look at each stock to determine which is the better buy.

Protecting the house
Under Armour just delivered its 23rd straight quarter of 20%-plus revenue growth, a streak that's unmatched by any apparel company its size. Not only has it grown at an incredible pace since the recession, but it's showing no signs of slowing down. Under Armour has branched out into footwear with its Stephen Curry sponsorship making a splash in basketball this year driving footwear sales up a whopping 95% in the fourth quarter. In view of the successe of industry leaders like Nike and Adidas, the opportunities in footwear may be greater than those in apparel.

In addition to the soaring basketball footwear sales propelled by Curry's phenomenal year, the company has  found traction in running with its Speedform footwear, and in golf with its partnership with Jordan Spieth.

The recent weakness in sports apparel retail reflected in the bankruptcy of Sports Authority, the sharp declines of Performance Sports Group, and weak sales at Dick's Sporting Goods, could cause concerns about the prospects of manufacturers like Under Armour, but the company has already said that its 2016 outlook is unaffected by Sports Authority's bankruptcy.

As Under Armour's steady growth rate and future prospects show, its brand should be strong enough to overcome any weakness at its retail partners, especially with the investments its making in technology and its momentum in footwear.  Under Armour already counts 160 million registered users of its Connected Fitness platform, which includes sites like the MapMyFitness umbrella, and its innovation with products like HeatGear and ColdGear should ensure continuing growth.

Straddling style and sport
As classic as any sports brand, Adidas may be as well known for its influence on style as for sport. Founded in the 1940s, the German brand got its start in soccer and became a style icon with the help of the 1986 Run-DMC song, "My Adidas," which only enhanced its street cred.

Adidas owns a broad family of brands including Rockport, TaylorMade, and CCM, giving the company strong positions in golf, hockey, and dress and casual footwear, in addition to the Adidas/Reebok portfolio, which encompasses soccer, basketball, running, and tennis.

After several years of sluggish growth, Adidas has shown signs of rejuvenation  in recent months, jumping 50% since September. 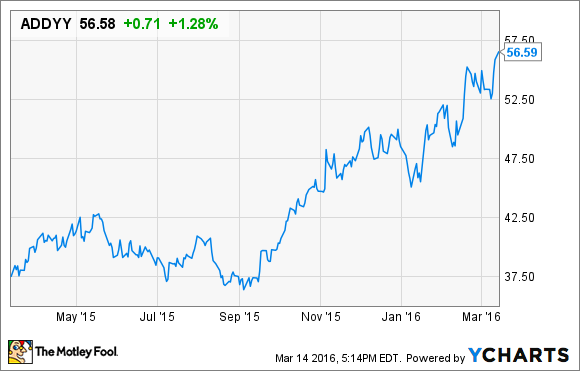 In its most recent earnings report, the company posted a 29% increase in net income, and Adidas brand sales were up 16%. For the current year, it foresees 12% growth in revenue and 10% growth in operating income.

In its attempt to turn around the brand, Adidas is reaching for the star power of hip-hop once again, collaborating with Kanye West on the Yeezy line of shoes and with Pharrell Williams on a redesign of the classic Superstar shoe. Those efforts have yielded results, but the sports giant still has a struggle ahead if it's to regain lost market share. Over the past two years in the U.S., Skechers has replaced it as the No. 2 footwear brand, and Under Armour has claimed the No. 2 spot in apparel.

And the winner is...
Considering Adidas's recent weakness, which includes slow growth for the Reebok brand, an unimpressive recent history with sponsors, and the loss of market share, Under Armour appears to be the better bet. While Under Armour shares are pricey at a P/E of 77, Adidas is not exactly cheap with a P/E of 38. In addition, it seems like high expectations are now baked into Adidas' stock price following the recent spike, as the company's earnings per share have been nearly flat for the last five years.

Under Armour, on the other hand, has outperformed both as a stock and as a company, putting up an enviable growth streak in the process. The stock is expensive, leaving investors at risk of a sell-off, but management seems to have the pieces in place for continued growth. Compared to Adidas, Under Armour is likely to generate higher returns years down the road.