NextEra is a utility in growth mode, which presents opportunities, risks, and a lot of complexity.

NextEra Energy (NYSE: NEE) is a utility that's in the process of making big changes. You might have seen the name in the news because of its proposed acquisition of Hawaiian Electric Industries (NYSE: HE), but this deal is just a small piece of what you need to know about NextEra. Here's the five-minute guide.

A bit of regulation
The biggest part of NextEra is its regulated power business, which, at the moment, is made up of Florida Power and Light (FPL). This business provided around two-thirds of the utility's revenues last year. So, in many ways, this is the driving force at NextEra -- though it might be more appropriate to call it the foundation on which the company is being built.

Regulated utilities are granted a monopoly but, in return, have to get their rates approved by the government. FPL has a generally constructive relationship with its regulators, so this hasn't been a major issue. But it's one you'll have to keep a close eye on nonetheless.

Those rate increases come from spending on new power plants and upgrading infrastructure. So another piece of the equation is FPL's capital spending plans. On that score, the NextEra intends to spend as much as $16 billion between 2015 and 2018 at its regulated FPL business. That spending should underpin its rate requests in the near term.

The independent
All of that said, the regulated business accounts for about two-thirds of earnings, so it's a solid foundation, but there's more to know about NextEra. That's where its non-regulated business comes in. This segment sells power on the open market to other utilities. Merchant power, which made up almost all of the rest of the company's revenues last year, has been a tough market in general because low natural gas prices have kept a lid on electricity prices. 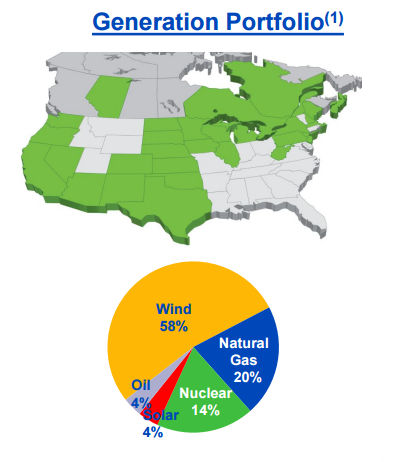 NextEra, however, has been changing along with the industry here, focusing on in-demand low-carbon and renewable power assets. For example, the company's NextEra Energy Resources subsidiary generates roughly 60% of its power from wind, 4% from solar, and 14% from nuclear. The rest comes mostly from natural gas. The heavy concentration in low carbon fuels has allowed the company to sign long-term contracts, helping to mitigate some of the risks in the merchant power business.

That other company
Then there's the limited partnership, NextEra Energy Partners LP (NYSE: NEP). This is what's commonly called a yieldco, with NextEra as the parent and general partner. The point of this company is to allow NextEra to sell assets, or "drop down" in LP lingo, to the partnership. That generates cash for NextEra to use for its growth plans and grows the partnership's business. The partnership taps the public markets to raise capital for the purchases.

Because NextEra is the general partner, however, it still gets to retain control of the assets. The general partner takes care of running the assets and gets paid a management fee. It also gets incentives if the partnership raises its distribution, something that usually happens after "drop downs." And because NextEra also owns LP units, it receives distributions as well. This is pretty much a win/win for NextEra and its shareholders, assuming that the partnership can access the capital markets.

That's a worthwhile concern, since some yieldcos have pretty much blown up. But this doesn't appear to be the case here, since NextEra Energy Partners just started the process of issuing new shares so it could buy more solar assets from its parent. In other words, investors seem to still approve of NextEra's yieldco, which means it's still a valuable lever to support long-term growth.

What about Hawaii?
So all of that is the base of the business, with FPL the core and NextEra Energy Resources and NextEra Energy Partners layered on top. None of this is headline-grabbing news, even though you need to understand it if you are going to invest in NextEra. The headline grabber today is that NextEra is attempting to acquire Hawaiian Electric Industries.

Hawaiian Electric Industries is Hawaii's largest utility and owns a bank. It's been in the regulatory cross hairs to reduce its dependance on fossil fuels (relatively expensive and dirty oil is a main fuel source) and shift toward renewables such as solar. How Hawaiian Electric plans to make that change has been a contentious issue. And then NextEra said it would step in and buy the utility and bank holding company (it doesn't plan to keep the bank) for $4.3 billion, helping push the change along.

But the downside to regulation is rearing its ugly head. Hawaii's regulators don't appear too pleased with the deal, and some industry watchers suggest it won't happen. This is, without a doubt, exciting stuff in utility land, but NextEra doesn't need to acquire Hawaiian Electric to keep growing its current business. That said, news here, good or bad, could wind up driving the share price over short periods of time. So you need to keep up with what's going on.

Sum of the parts
When all is said and done, NextEra is a sum-of-the-parts exercise. You need to understand the regulated business and the unregulated one. You need to figure NextEra Energy Partners into the mix, though it's a separate but controlled entity. And you need to remember that there's a big acquisition in the wings, maybe. That's a lot of moving parts to cover in a five-minute guide, but for an investor willing to take some extra time to understand what's going on, NextEra could make for a compelling investment opportunity.