As the price of oil has continued to turn the screws on the industry for close to two years now, shares of Schlumberger (NYSE:SLB) have held up relatively well compared to its peers. They have been able to do so in part because of the company's ability to cut costs and maintain margins, as well as its lower exposure to shale drilling in the U.S. 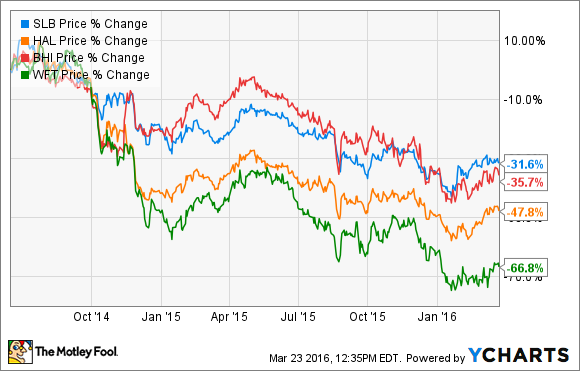 At the same time, though, this two-year slog can make investors start to wonder what catalysts will help the company's stock head back in the right direction. Aside from the obvious one -- oil prices -- here are three things investors should watch for as potential reasons Schlumberger's stock could recover.

A rebound in offshore exploration & drilling
It's pretty much a given that Schlumberger would see a decent uptick in business if we were to see an uptick in drilling activity across the oil and gas industry. With U.S. land-rig counts at their lowest since we started keeping track, and oil majors cutting back on spending by as much as 20%, there isn't a lot of work for Schlumberger and its peers right now. 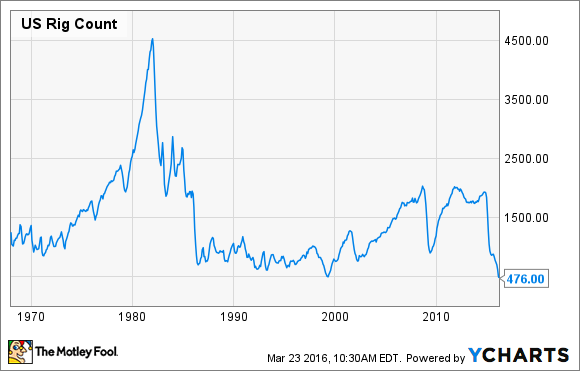 For Schlumberger's stock to outperform its peers, though, we would need to see a gain in the offshore and international markets over the others. Of the major diversified oil-service providers, Schlumberger has the lowest exposure to the North American and shale markets.

Once Schlumberger completes the acquisition of Cameron International (NYSE:CAM.DL), it will make Schlumberger's exposure to North America smaller, and its exposure to offshore even more pronounced as Cameron's equipment is mostly tied to subsea infrastructure and other offshore use.

Being tied to the international and offshore markets has benefits and shortcomings. Typically, offshore jobs are more service intensive and have a higher demand for technology and innovation, which means Schumberger has higher pricing power and can earn higher margins on offshore work. The drawback, however, is that offshore is a longer tail project with lots of upfront capital.

With cash flows drying up at producers, the appetite for offshore projects is drying up fast. But the greater concern is that producers will trend toward shorter-cycle development projects like shale until their balance sheets get cleaned up. If that were the case, then Schlumberger's stock may stall compared to its peers once a recovery starts to set in.

Offshore oil production will likely remain a critical component of the oil-production mix; it just may take a while longer until it really picks up. Once it does, though, we can expect Schlumberger's stock to see some impressive gains relative to its peers.

Cameron acquisition goes off without a hitch
Unlike Halliburton's and Baker Hughes' continued troubles to make their merger happen, Schlumberger's acquisition of Cameron International received little pushback from regulators, and remains on track to be completed some time soon. As it goes with acquisitions, though, now comes the hard part.

Unlike the Halliburton-Baker Hughes merger that involves the integration of two similar businesses, Schlumberger's purchase of Cameron is a venture into a relatively new business. Cameron is, in principle, an equipment manufacturer, while Schlumberger's wheelhouse has been providing services and technical support for producers. What this means is that there may be slightly less overlap in the business -- you know, those places where management says it can generate "cost synergies."

Schlumberger has said that the Cameron integration will lead to a significant reduction in working capital by 25%, and support costs by 10%, but we will have to wait and see the wheels hit the road before we can make any definitive conclusions about the effectiveness of the acquisition. If the company can meet the promises it has stated about the merger, then it would not be surprising if investors reward Schlumberger's shares for a job well done.

A shift toward integrated equipment and services contracts
On top of the traditional hurdles that the Cameron acquisition will face, Schlumberger is also making a shift that may be well received by the oil and gas industry, in general. Most notably is a shift toward more leased equipment rather than straight-up sales.

That is why we recently saw offshore rig contractor Diamond Offshore (OTC:DO) and General Electric (NYSE:GE) sign a unique deal regarding its subsea equipment. GE will buy back several blowout preventors from Diamond, and will then lease them back to Diamond under a service contract. The theory behind this move is that, with the equipment manufacturer responsible for the repair and maintenance of the equipment, it will incent GE to reduce downtime, which, in turn, makes Diamond Offshore's offering to producers more attractive.

With Cameron as a part of the Schlumberger brand, it's possible that Schlumberger could do something similar, and it has hinted at such in recent management presentations. CEO Paal Kibsgaard has said that the company is developing more "integrated" solutions for producers that would reduce the need to go to a multitude of suppliers. This is a unique position in the space that is not easily replicated by either Halliburton or Baker Hughes unless they also go out and make a similar acquisition.

If this leased business model were to take hold at Schlumberger, then it could see a nice uptick in share price relative to its peers.

What a Fool Believes
In general, Schlumberger's stock will be beholden to the spending habits of oil and gas producers across the globe. For the time being, it looks as though we won't be seeing any significant improvements here until this production and inventory glut clears. Beyond that, though, a more targeted improvement in offshore capital spending, a successful integration of Cameron International, and a potential shift toward more equipment and services contracts going hand in hand could give Schlumberger the boost that its investors have been waiting for.