Please ensure Javascript is enabled for purposes of website accessibility
Log In Help Join The Motley Fool
Free Article Join Over 1 Million Premium Members And Get More In-Depth Stock Guidance and Research
By George Budwell - Mar 28, 2016 at 11:00AM

The moment of truth is nearing for the biopharma's Parkison's disease drug, Nuplazid.

What: Shares of Acadia Pharmaceuticals (ACAD -0.91%) gained more than 20% in early morning trading today on exceptionally high volume. The apparent catalyst behind this move upward was a positive note in the FDA's briefing documents for the company's experimental Parkinson's disease psychosis (PDP) drug called Nuplazid (pimavanserin), which is scheduled to be reviewed by a panel of outside experts tomorrow. Specifically, the agency noted in its internal review:

Although the Division usually requires evidence of efficacy from more than one positive, adequate, and well-controlled trial, it is within our authority to rely on one robustly positive trial, especially when we have supportive evidence from the early part of the development program.

So what: Short-sellers have been piling into Acadia ahead of Nuplazid's regulatory review, presumably because the drug has failed to meet its primary endpoint in three of its clinical trials and only hit the mark in a single late-stage study. 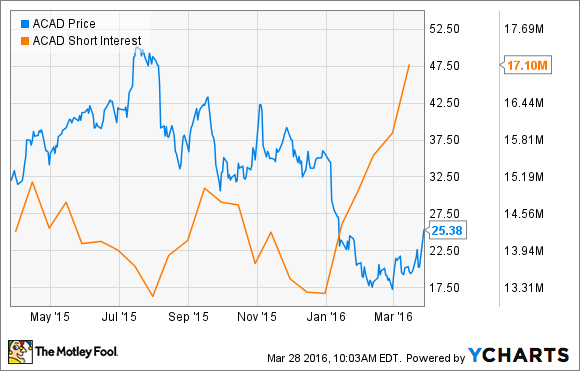 Now what: The FDA is expected to hand down Nuplazid's regulatory decision by May 1. As there are no approved treatments for PDP at the moment, some analysts think Nuplazid could generate peak sales in excess of $3 billion if approved. So, Acadia's shareholders will clearly want to pay close attention to tomorrow's review.

In light of the fact that most, if not all, of Acadia's valuation is built on Nuplazid's commercial potential, though, I personally won't be picking up any shares in this speculative biopharma until this significant regulatory risk is off the table.