Investors who closely follow PayPal Holdings (NASDAQ:PYPL) understand that for the company to prosper, it must consistently increase its Total Payments Volume, or TPV, the total dollar value of transactions conducted through PayPal's payments platform.

TPV is an example of what I'll refer to as "key metrics" in this article. These are measures which begin simply as useful ways to analyze performance, then grow in importance until an organization begins to make strategic decisions to sustain them.

That is, instead of just highlighting important data, a key metric in some ways becomes the end goal. Executives' minds begin to work backward, to figure out how a key metric can be made to trend higher over several quarters or years.

In PayPal's case, management supports TPV by paying close attention to two other key metrics the company furnishes to investors on a quarterly basis: active customer accounts, and payment transactions per active account.

While PayPal may have once tracked active customer accounts and the number of related transactions as a means to highlight growth, these metrics today are more like directives. Obtain more customers, and increase the number of transactions each customer makes, and you can thus leverage total payments volume.

To understand how this leverage works, let's walk through a brief example. For simplicity's sake, we'll assume that PayPal's overall average transaction size in dollars doesn't vary drastically from quarter to quarter -- which tends to be the case.

With a static transaction size, if PayPal expands its active customer account base by 10% in a business quarter, and the number of transactions per account doesn't change, then it's fairly straightforward to see that TPV would also increase by 10%.

However, if PayPal is also able to improve payment transactions per account by 10% on average during the same quarter, then TPV shoots up by 21%.

Reviewing PayPal's published quarterly metrics trends, it's apparent that this is just the mechanism the company uses to produce TPV growth which hovers in the 20% plus range. The company tends to divide the volume growth burden equally between active account additions and transaction frequency expansion: 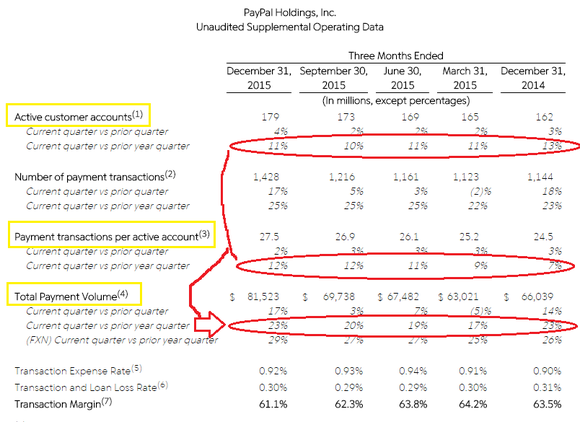 Image source: PayPal Q4 2015 Financial Statement Supplement. The yellow and red highlighting is by the author.

Again, these numbers don't take into account any changes in average transaction size per quarter, which PayPal's merchants have a greater control over than PayPal, so the math behind the leverage effect isn't perfect, but it's pretty close.

Key metrics dictate the action
If PayPal can ensure that the key metrics of active customer accounts and payment transactions per active account flourish, the company's business structure will take over to ensure profitability in a given quarter. PayPal's most recent quarterly transaction margin hit 61.1%. This means that for every dollar in transaction fees PayPal charged against TPV, it netted $0.61 after transaction costs and transaction loan losses.

The company's transaction margin has declined during the last two years from the mid-60% range, as it processes a greater amount of credit card transactions due to its acquisition of payments software specialist Braintree. Nonetheless, a transaction margin of 60%-plus more than covers PayPal's fixed overhead, leaving extremely healthy net income, as well as profit margins, which landed north of 17% in PayPal's most recent reported quarter.

It doesn't take much of a leap to observe how the organization's strategic actions are designed to impact these two key metrics. This month, Joanna Lambert, vice president of PayPal's Global Consumer Product & Engineering, shared results of PayPal's recent redesign and relaunch of its primary mobile app. The company has seen a 12% increase in downloads of the updated app compared to pre-launch numbers. Lambert also shared that transactions using the app's "order ahead" feature had spiked by more than one-third versus the week preceding the launch.

PayPal's mobile app redesign has the dual purpose of pulling in new customers and making the interface easier for the current account base to use. As the company's global head of product communications, Anuj Nayar, told payments website PYMNTS.com in February, the company relied on user feedback to isolate and get rid of clutter. It also identified the features users prized most, and moved them to the front of the interface, thus clearing the way for increased activity.

Similarly, the order-ahead feature, which allows customers to order food and other items from local merchants via the mobile app, is aimed squarely at facilitating the frequency of transactions. The convenience of mobile advance ordering gives consumers an incentive to use PayPal's digital wallet, as opposed to say, walking into a local bagel shop, ordering off the menu, and paying with a traditional credit card fished out of one's physical wallet.

In sum, shareholders can obtain a greater degree of insight into PayPal's growth by drilling down beyond TPV each quarter, and checking the pulse of the two other key metrics we've discussed. PayPal's business rests on the architecture of a pretty simple formula: More customers, transacting more frequently, equals higher volume. Over the near term for PayPal, its metrics are its destiny.