The company is expected to post a loss, and its outlook will give investors a better idea of whether a recovery is in the cards this year.

Expectations are low as memory chip manufacturer Micron Technology (MU 1.86%) prepares to report its second-quarter results Wednesday after the market close. Following two years of impressive profitability in fiscal 2014 and 2015, oversupply in the DRAM market has caused Micron's bottom line to collapse. The company expects to post a loss for the quarter, and its outlook will be closely watched by investors betting on or against a quick turnaround.

What analysts are expecting
Micron's revenue is expected to decline by 26.8% year over year to $3.05 billion, according to the average analyst estimate, within a range of $2.9 billion to $3.2 billion provided by management. Weak demand for PCs and slowing growth in the smartphone market are weighing on the company's results, driving down prices faster than Micron can cut costs. During the fiscal first quarter, DRAM selling prices slumped 13% for the company, while cost-per-bit fell by only 10%. This trend likely continued during the second quarter.

Micron expects to post a non-GAAP loss between $0.05 and $0.12 per share during the second quarter, a range that spans the average analyst estimate of an $0.08-per-share loss. That's down substantially from the $0.81 in non-GAAP EPS Micron reported during the same period last year, and the $0.24 reported during the first quarter.

Analysts still expect Micron to report a non-GAAP profit for the full year, calling for EPS of $0.37. For fiscal 2017, analysts expect a major recovery, with an average estimate for non-GAAP EPS of $1.39. For these analyst estimates to be borne out, the DRAM market will need to improve this year, and Micron's profitability will need to bottom out soon. Neither of those developments are guaranteed.

Look for mobile deterioration
The PC market has been weak for quite some time, and margins in Micron's compute networking segment, which includes products for PCs and servers, have been declining rapidly. During the first quarter, this segment managed a non-GAAP operating margin of just 1.8%, a far cry from the 29.8% margin reported during the prior-year period.

The mobile segment has held up better. During the fourth quarter of 2015, which ended in November, the segment managed a non-GAAP operating margin of 27.3%. Operating margin fell to 16.3% during the first quarter, a steep decline for sure, but still far superior to the profitability of the PC segment. The global smartphone market is still growing, with IDC expecting smartphone shipments to grow by 5.7% in 2016, but that growth has slowed dramatically compared to recent years.

Back in October, Gartner predicted that the DRAM oversupply plaguing the PC segment would seep into the mobile and server segments in 2016. Signs of this were evident in Micron's first-quarter earnings report, but the picture will become more clear on Wednesday. If mobile margins decline steeply again, and if Micron's guidance calls for a bigger loss during the third quarter, any hope of a quick turnaround will likely be dead.

A possible opportunity
After peaking at around $35 per share in late 2014, shares of Micron have been collapsing ever since. I warned last July that Micron was too expensive in the high teens, and since then the stock has continued its descent to around $10 per share. 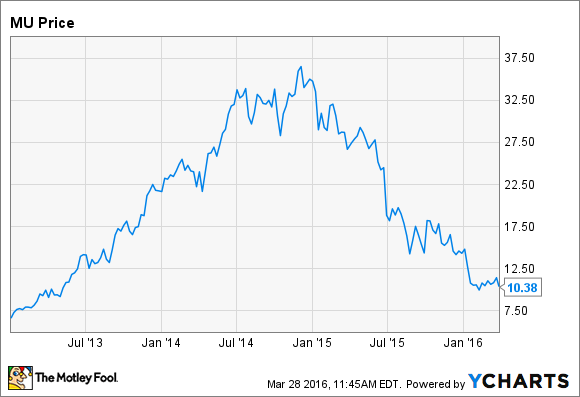 As a value investor, I'm always looking for situations where pessimism drives a stock too low. Micron now trades at a discount to book value, and as I pointed out in a previous article, a price of $8 per share would put the stock at roughly the same P/B ratio compared to the last time DRAM prices plunged and Micron's bottom line got dragged into the red.

If Micron provides disappointing guidance on Wednesday, the stock could eventually tumble below $8 per share, and at that price, I think Micron is a good value. There's no telling when the company will recover, and it may take a lot longer than analysts are expecting, but buying when almost everyone else is throwing in the towel is often a recipe for success, especially when it comes to cyclical companies like Micron.