Please ensure Javascript is enabled for purposes of website accessibility
Log In Help Join The Motley Fool
Free Article Join Over 1 Million Premium Members And Get More In-Depth Stock Guidance and Research
By Timothy Green - Mar 10, 2016 at 9:45AM

Many analysts are optimistic that Micron will see rebounding margins this year, but history and reality suggest otherwise.

Shares of memory chip manufacturer Micron (MU 3.95%) are now down about 70% since late 2014. Weak sales of PCs and slowing demand for smartphones have helped fuel oversupply in the DRAM market, pushing prices down. In 2015, Micron's average per-bit selling price for DRAM declined by 11%. 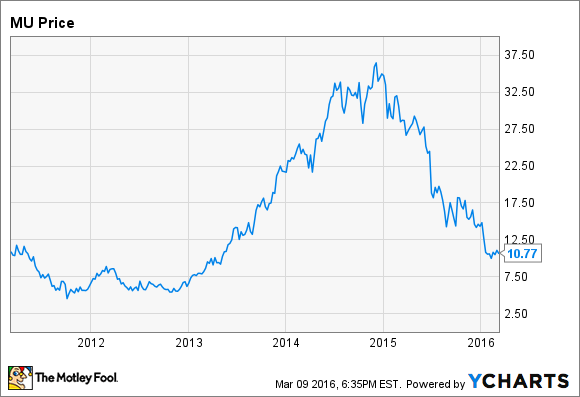 When prices fall faster than Micron can cut per-bit costs, the company's profitability suffers. After posting exceptional profits during fiscal 2014 and 2015, Micron now expects to post a loss during its fiscal second quarter, results for which the company will report at the end of March.

Most analysts seem to believe that Micron's profitability will bottom out this year, driven by Micron's investments in lowering its cost per bit. During Micron's recent analyst day event, the company pointed to superior yields with its 20nm manufacturing process compared to its 25nm process. In addition, the jump to 1Xnm is expected to bring with it at least a 20% cost reduction compared to 20nm, and 45% higher DRAM densities. Micron expects its DRAM average cost per bit to be 15%-25% lower in fiscal 2017 compared with fiscal 2015.

There is one analyst who is less optimistic. Romit Shah from Normura recently cut his price target on the stock down to $8 per share, citing concern that oversupply will continue, driving average selling prices down by at least 30% in 2016. Even major per-bit cost cuts from Micron won't prevent slumping profitability under that scenario.

Little reason for optimism
If DRAM prices were to only fall as much as they did in 2015 this year, Micron would probably have a pretty good 2016, given the cost cuts that it expects to achieve. The problem is that there's no real reason to believe that this will be the case. The PC market remains extremely weak, smartphone units are set to rise by a single-digit percentage this year, and tablet sales are tumbling.

The last time the DRAM industry suffered from oversupply was 2011-2012. During those years, Micron's DRAM average selling price per bit declined by 39% and 45%, respectively, for a two-year decline of about two-thirds. Micron posted a $1 billion net loss in fiscal 2012.

A 30% decline in prices this year would be far from unprecedented and in fact would be significantly better than either 2011 or 2012. Ultimately, Micron's performance will be determined by prices, and that's largely out of the company's control.

One argument that bullish analysts are making is that the industry, which consists of Micron, Samsung, and SK Hynix, are focused on maintaining profitability, not market share. If that were the case, it would go against history, as well as common sense. The DRAM industry is the same as any other commodity industry, like mining or airlines, where supply and demand determine pricing. There are good times and there are bad times, and barring collusion, the bad times cannot be avoided indefinitely. Nomura's Shah suggests that the focus is indeed on maintaining market share, a conclusion drawn after the analyst met with each DRAM supplier.

Normura's $8 price target is, coincidentally, the most I would be willing to pay for the stock. That price is about 70% of Micron's book value, which is roughly the low hit during late 2011. 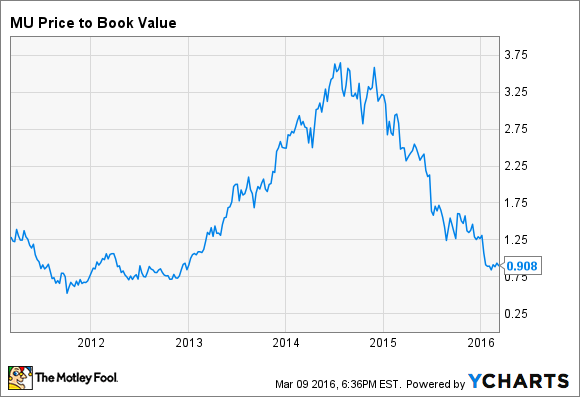 That price is also about 10-11 times the average earnings estimate I calculated in a previous article, determined by averaging the company's return on invested capital from 2011 through 2015.

Eventually, Micron will be able to cut per-bit costs faster than DRAM prices decline, and profitability will improve. The only question is when. I think the most likely scenario is that 2016 will be another tough year for the company, with profitability continuing to degrade. I don't expect margins to improve in the next few quarters, although given how difficult it is to predict DRAM pricing, I could very well be wrong. We'll know more later this month when Micron reports earnings.