Shares of the memory-chip maker have plummeted over the past year, making the stock look incredibly cheap. But it's not quite as cheap as it seems.

Shares of memory-chip manufacturer Micron Technology (MU -2.44%) have been clobbered over the past year, losing nearly two-thirds of their value. DRAM oversupply, triggered in part by a weak PC market, has led to slumping DRAM prices and lower profits for Micron. After reporting record profits in both fiscal 2014 and 2015, Micron expects to post a loss during its second fiscal quarter.

Back when Micron traded for around $15 per share, I argued that the stock was still too expensive, despite a single-digit price-to-earnings ratio. Micron is a perfect example of why valuing a cyclical company based on either past results or analyst estimates can be dangerous. Analysts are now expecting just $0.47 in per-share earnings for fiscal 2016, down 82% compared to fiscal 2015, and down 65% compared to analyst estimates 90 days ago. And that number could prove to be optimistic if the oversupply situation in the DRAM market persists throughout 2016.

Since that article was published, Micron stock has tumbled by another third, hitting a 52-week low of $9.31 per share earlier this month. With a current stock price of roughly $10.50 per share, is Micron stock finally cheap enough to be considered a bargain?

Valuing Micron
Any company that deals in commodity products will have good years and bad years. For Micron, fiscal 2012 was a very bad year. The company posted a net loss of $1 billion, driven by rapidly falling per-bit DRAM prices. Fiscal 2014 and 2015, in contrast, were very good years, with Micron earning about $3 billion in net income each year, due to both the acquisition of Elpida boosting revenue and strong demand for DRAM chips.

There are two numbers that I think are relevant when it comes to valuing a company like Micron. The first number is the price-to-book ratio relative to historical values. The price-to-book ratio isn't all that useful in an absolute sense, but for a capital intensive, commodity business like memory chips, it's a good way to compare the current valuation to past levels. Here's how Micron's price-to-book ratio has evolved over the past decade: 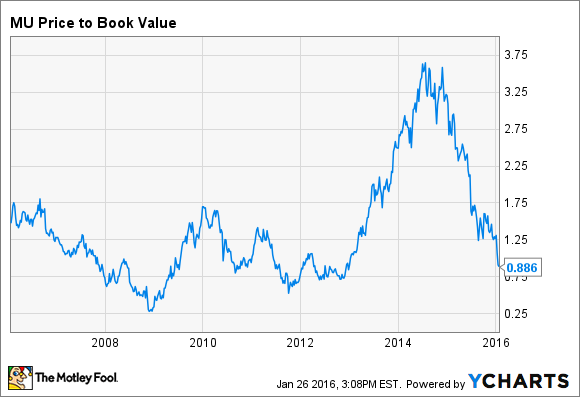 There are a couple things to note here. First, the soaring stock price during 2013 and 2014 pushed Micron's price-to-book ratio to levels not seen since the dot-com bubble. This suggests that investors believed that the economics of the memory chip industry had fundamentally changed, driven by consolidation. Some analysts expected EPS to bottom out in positive territory this year due to this consolidation, but Micron's guidance for losses during the second quarter threw cold water on that idea.

The jury is still out on whether the DRAM industry is structurally different with three major competitors instead of four, and we'll have to wait for this cycle to play out before we know the answer. My suspicion is that it won't be dramatically better; perhaps the bad years will be slightly less bad for Micron, but I doubt the oversupply-undersupply cycles will cease.

The second important thing about this chart is that Micron now trades at about 0.9 times book value. That's not as low as it was during late 2011, but it's not too far off. Back when the stock was at $15-$16 per share, the price-to-book ratio was still elevated, which was one reason why I thought the stock was overvalued at the time. Now, at around $10.50 per share, the price-to-book ratio is nearing its multi-year low.

The second relevant number is Micron's average earnings over the course of a cycle. For long-term investors planning to hold the stock for years, this is the earnings number that matters. This number will necessarily be a rough estimate, but slapping a multiple on an average makes a lot more sense than using peak earnings.

From fiscal 2011 to fiscal 2015, Micron's return on invested capital ranged from (5.29%) to 14.95%, with an average of 5.88%. To calculate these numbers, I divided Micron's net operating profit after taxes by the total invested capital for each year, using the average tax rate over the past five years.

Based on Micron's total invested capital in 2015, this average ROIC leads to a net operating profit after taxes of $1.21 billion, and a net income of roughly $880 million, adjusting for interest payments, or about $0.75 per share. Remember, these numbers should be viewed as ballpark figures, not precise estimates.

At $10.50 per share, Micron trades at about 14 times this average earnings number. That's not a no-brainer bargain, but it also doesn't seem overpriced. My estimate for average earnings may prove to be pessimistic: if the DRAM industry truly has improved, I'd expect Micron's average ROIC to be higher in the coming years. But I'd rather err on the side of caution and assume that it won't.

Of course, all of this ignores the potential of 3D XPoint, a new type of memory that Micron's management believes could produce billions of dollars of additional revenue by 2018. That would certainly change the math.

Is Micron a bargain? No, I don't think it is. But I do think it's now safe to say that the stock is no longer overpriced. For investors who are optimistic about the DRAM industry and the potential of 3D XPoint, $10.50 per share is a reasonable price to pay. I'm not quite that optimistic, so I'd like to see a couple more dollars shaved off the share price before I consider buying the stock.