Shares of memory chip company Micron (NASDAQ:MU) have collapsed so far this year, down about 50% over the past eight months. A weak PC market, disappointing earnings reports, and concerns about DRAM oversupply have sent shares tumbling on multiple occasions, and the announcement of 3D XPoint memory last month wasn't enough to stymie the decline.

After a huge run that began in early 2013, a big chunk of those gains have now been lost. 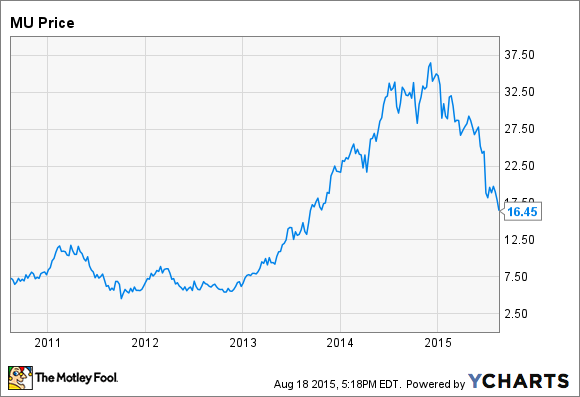 How much further can Micron stock fall? If the worst-case scenario of DRAM oversupply plays out over the next couple of years, another big decline could be on its way.

Not as cheap as it looks

Micron manufactures DRAM and NAND, and the price it gets for them is highly dependent on supply and demand. During times where demand outpaces supply, Micron can turn a tidy profit thanks to high prices. This was the case in 2010, 2014, and the first three quarters of fiscal 2015.

When supply outpaces demand, though, things quickly fall apart. The financial crisis was particularly bad for Micron, but the company also lost money in 2012, posting a net loss of over $1 billion. These cycles of oversupply and undersupply lead to extremely volatile results, and they make valuing Micron based on past earnings or estimates for future earnings difficult.

Micron appears extremely cheap based on analyst estimates for earnings. On average, analysts expect the company to earn $2.69 per share in the fiscal year that ends in August, putting the forward P/E ratio at just about 6. On this basis, Micron looks like an incredible value.

But these estimates have been falling: 90 days ago, analysts were expecting per-share earnings of $3.13. And if the DRAM market continues to deteriorate, earnings could fall dramatically going forward. The extremely low forward P/E ratio should offer no comfort to investors if the estimates aren't accurate. Garbage in, garbage out.

If we look at Micron from a different perspective, book value, it becomes clear that even after the 50% decline in the stock price this year, the stock is not particularly cheap compared to historical values: 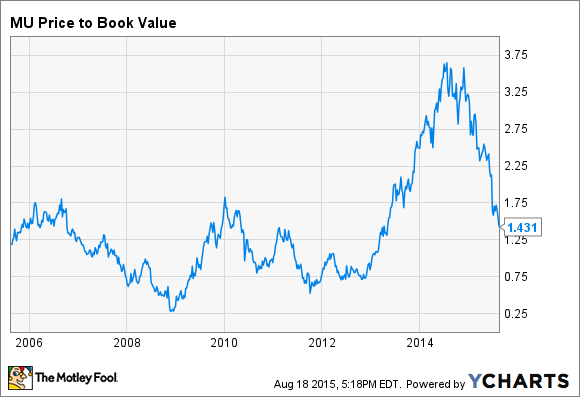 Book value is a company's assets minus liabilities, and for a company like Micron, which operates in an extremely capital-intensive industry producing commodity products, the price-to-book ratio is a good way to compare valuations over time.

Over the past decade, the stock has traded in the vicinity of its book value, fluctuating depending on where Micron was in the oversupply undersupply cycle. It spiked along with the stock price in 2013 and 2014, reaching levels not seen since soon after the bursting of the dot-com bubble.

Higher levels of profitability can drive higher price-to-book ratios, and Micron was certainly very profitable during 2014. But the company was no more profitable than it was in 2010, the last time profitability soared. Micron's operating margins in 2010 and in 2014 are nearly identical: just shy of 19%. Yet Micron's price-to-book ratio reached about 3.6 during 2014, more than twice its peak value in 2010.

Even after the big decline in the stock price this year, Micron still trades at about 1.4 times its book value. Gartner is expecting global DRAM revenue to decline in 2016 as oversupply causes steep declines in per-bit prices, and if that scenario plays out, a repeat of 2012 could be in the cards for Micron. Micron's stock reached a price-to-book ratio of about 0.7 in late 2011, so another 50% decline in the stock price wouldn't be out of the ordinary.

That's not to say the stock is going to continue to fall; I have no idea what Micron stock is going to do. But the idea that it can't possibly go any lower because it's already fallen so much doesn't mesh with reality.

The industry has consolidated, with only three major DRAM manufacturers remaining, but I don't think the dynamics of the industry have fundamentally changed. Whether the next few years play out like 2012, with oversupply leading to losses for Micron, remains to be seen. But things could still get a whole lot worse for investors.