bluebird bio and Alnylam Pharmaceuticals were once both superstars of the clinical-stage biotech world. Here's one Fool's take on which stock has the better chance of bouncing back.

Last year, Alnylam Pharmaceuticals (ALNY 1.65%) and bluebird bio (BLUE 3.38%) were shining examples of the market's exuberance toward all things biotech. After all, both of these clinical-stage biotechs saw their shares skyrocket higher at the start of 2015. As the market cooled, though, Alnylam and bluebird sank, along with the rest of the biotech industry: 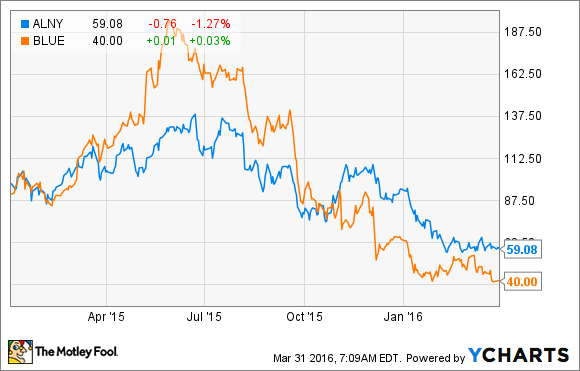 With bluebird's and Alnylam's shares currently trading close to their 52-week lows, according to S&P Global Market Intelligence, let's consider which stock has the better chance of recapturing some of its former glory moving forward.

Bluebird is targeting rare diseases and cancers with its gene therapy platform
The biotech's most advanced clinical candidate is LentiGlobin, a gene therapy indicated as a treatment for the rare blood disorder beta thalassemia, which leads to severe anemia and shortened lifespans, as well as severe sickle cell disease. Although LentiGlobin initially appeared like it could be a broad cure for beta thalassemia patients, the company's last clinical update showed that it's only really effective in patients with milder forms of the disease, implying that its commercial potential may be somewhat limited. This news caused bluebird's shares to plummet late last year, and it's yet to show any signs of recovering in 2016.

Aside from LentiGlobin, bluebird is also building out an adoptive T cell platform that includes chimeric antigen receptor (CAR) and T cell receptor therapies. On this front, the biotech's lead oncology program, bb2121, is a CAR T cell product candidate indicated as a treatment for multiple myeloma.

Last February, bluebird and its partner Celgene launched an early stage study for bb2121 in patients with relapsed/refractory multiple myeloma. By opting in to exclusively license bb2121, Celgene forked over $10 million to bluebird as an initial milestone payment, and bluebird is also now eligible to receive additional payments if the therapy meets certain criteria during its development.

The caveat with bb2121 is that there are several other adoptive T cell therapies in development for multiple myeloma at the moment. On the bright side, some experts believe that bluebird's particular experimental candidate might a best-in-class product based on a small preliminary study presented at last year's Annual American Society of Hematology meeting. That said, the therapy still has a long way to go before its potential as a viable product candidate is well understood, meaning that all eyes will probably remain on LentiGlobin's clinical program for the time being.

Alnylam is an emerging RNA therapeutics company
Alnylam is building a broad pipeline of RNA therapies to treat genetically based rare diseases, cardio-metabolic diseases, and hepatic infectious diseases. Like its chief competitor Ionis Pharmaceuticals (IONS 2.81%), Alnylam's most advanced clinical programs are targeting rare diseases that tend to have faster developmental and regulatory time frames, along with the added benefits of premium pricing structures and certain tax advantages (once approved).

Specifically, Alnylam should have a total of four late-stage trials for rare diseases, such as the protein misfolding disorder known as TTR-mediated amyloidosis (ATTR) and the bleeding disorder hemophilia, in progress by the end of 2016, according to a recent investor presentation.

The biotech's most advanced clinical candidate is patisiran, indicated as a potential treatment for the familial amyloidotic polyneuropathy form of ATTR that's associated with the loss of autonomic nervous system function. Patisiran's ongoing late-stage trial is expected to produce top-line data in 2017, meaning that Alnylam could possibly transform into a commercial operation in 2018 if things go as planned.

After patisiran, Alnylam's second-most-advanced late-stage product candidate is revusiran, an experimental treatment for the familial amyloidotic cardiomyopathy manifestation of ATTR that causes heart failure. Revusiran's pivotal trial should read out in late 2018, putting a regulatory filing on track for perhaps the middle of 2019.

Finally, the biotech recently announced that it is on track to launch two late-stage trials for fitusiran as a potential treatment for severe hemophilia A and B patients later this year.

As patisiran and revusiran have both generated unprecedented response levels in their earlier studies -- implying that they are indeed effective treatments for ATTR -- perhaps the biggest downside risk with Alnylam at the moment is the fact Ionis is nipping at its heels with its own ATTR treatment known as IONIS-TTR. IONIS-TTR is expected to read out at around the same time as patisiran, which could lead to a fierce battle between the two companies for market share down the road.

Which is the better stock to buy right now?
While both of these clinical-state biotechs are on the risky side, I think Alnylam is probably the safer bet at the moment based on the impressive emerging clinical profile of patisiran, and the fact that the company's overall pipeline of RNA-based therapies is progressing nicely. Bluebird, on the other hand, has fewer shots on goal, so to speak, when it comes to producing a viable commercial product -- and LentiGlobin's commercial potential remains murky after the company's last clinical update.