In 2013, Intel (NASDAQ:INTC) announced that it had a plan to aggressively try to supply chips into the tablet market. In order to do this, the company would sell tablet platforms that weren't designed to be particularly cost-effective into the low-end of the tablet market.

The performance of these products, at least for tablets in the price range that Intel was gunning for, was actually quite good. However, this was not due to some engineering excellence on Intel's part, but rather because Intel tried to shoehorn a high-end platform -- which wasn't all that cost-effective to begin with -- into the low-end and mid-range.

In order to make these platforms viable for the low-end and mid-range of the tablet market, Intel provided system vendors with "contra-revenue" subsidies. These platforms simply required an expensive set of surrounding components to work, so Intel "made up the difference," so to speak, to customers who used its platforms with subsidies.

This program likely cost Intel, and its stockholders, in excess of a billion dollars. That's on top of the many billions in wasted research-and-development spending on failed mobile-targeted products.

The long-term purpose of this program was to establish partnerships/relationships with the major tablet vendors, and to make the company's proprietary Intel Architecture instruction set viable on the Android platform. Once that foundation was in place, Intel would be able to profitably gain share in the coming years as its product portfolio improved.

Unfortunately, it was all for naught -- a gigantic waste of money.

Why was it a waste?

Intel made it clear that its contra-revenue subsidies came down in 2015, and are expected to come down again in 2016. However, the "big idea" was that, as Intel rolled out new, more-competitive and cost-effective platforms, it would at least be able to maintain/grow its volumes in the tablet market.

That, however, hasn't really happened.

Below is a plot of Intel's tablet-processor sales by quarter since the beginning of 2014: 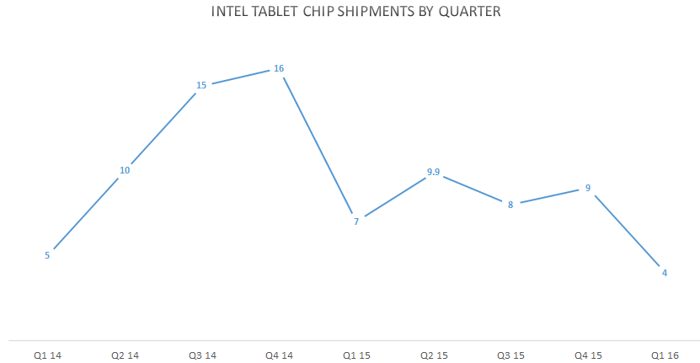 Keep in mind that there's a very straightforward explanation for this phenomenon: Intel didn't actually rollout the competitive products in 2015 that it had promised to investors back in 2013, when it announced this contra-revenue strategy. Those products remain missing in action as of this writing, and by the time they arrive, it's unlikely that they will even be competitive.

To make matters worse, Intel seems to have de-emphasized tablet/mobile applications processors, in general, so the odds that Intel will even be bothered to continue to pursue the tablet market in an aggressive fashion going forward seem low.