Please ensure Javascript is enabled for purposes of website accessibility
Log In Help Join The Motley Fool
Free Article Join Over 1 Million Premium Members And Get More In-Depth Stock Guidance and Research
By George Budwell - May 3, 2016 at 11:22AM

A minor revenue miss was enough to cause the pharma's shares to plummet on Tuesday.

What: Merrimack Pharmaceuticals (MACK -1.52%) saw its shares drop by nearly 11% immediately after the opening bell today due to the company missing consensus for its total revenue in the first quarter of 2016. Specifically, Merrimack reported $21.3 million in total revenue for the three-month period, whereas the Street was expecting a figure of approximately $24.1 million.

So what: Merrimack's shares have been tumbling ever since the FDA approval, and subsequent launch, of its advanced pancreatic cancer drug Onivyde last year. In fact, Merrimack's slide has even outpaced the hefty pullback in the iShares Nasdaq Biotechnology ETF (NASDAQ: IBB) over the last 12 months: 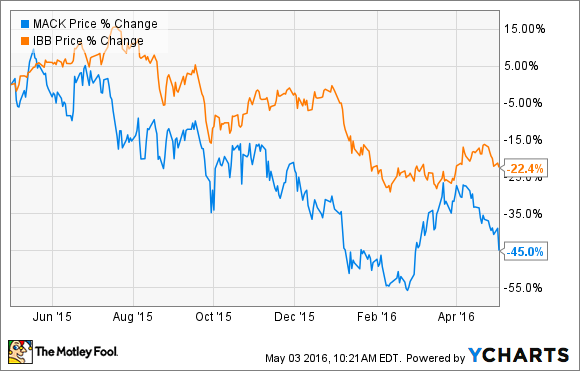 Now what: While this dramatic downturn in Merrimack's valuation can be disheartening for shareholders, the fact remains that Onivyde's commercial launch is going fairly well. After all, the company noted that the drug's sales picked up by 133% compared to the fourth quarter of 2015, and it's still the early days of the launch. On the flip side of the coin, market sentiment toward biotechs and biopharmas hasn't exactly been stellar this year, evinced by the iShares Nasdaq Biotechnology ETF's performance of late.

My take is that sentiment won't change until the U.S. presidential election wraps up, and the political rhetoric regarding drug pricing cools down. And that doesn't bode well for companies like Merrimack that are cash-flow-negative and lack any major near-term clinical catalysts. So, despite Merrimack's steady progress on the commercial front, I don't plan on picking up shares just yet.