Please ensure Javascript is enabled for purposes of website accessibility
Log In Help Join The Motley Fool
Free Article Join Over 1 Million Premium Members And Get More In-Depth Stock Guidance and Research
By Andrew Tonner - May 5, 2016 at 9:28AM 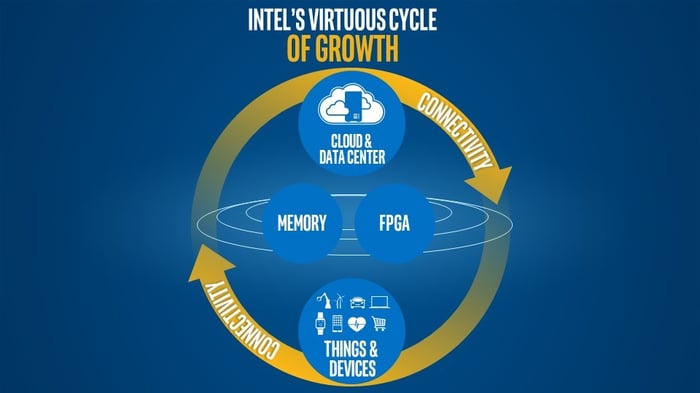 Intel's CEO wants you to know his company might be down, but it's certainly not out. Image source: Intel.

Amid another lackluster earnings season and newly announced layoffs, Intel (INTC -2.86%) chief executive Brian Krzanich took to the company's blog late this week to espouse his vision for Intel's future. But does Krzanich's plan seem feasible? Let's take a look.

Intel's future in five points
In a lengthy blog post, Krzanich goes to great pains to suss out his vision for the future of the semiconductor industry while also expounding on the areas of opportunity he sees for Intel specifically.

Broadly speaking, Krzanich characterizes Intel's efforts as shifting the company from the PC era to the cloud era. In describing his five major beliefs for the future, he starts by saying, "The cloud is the most important trend shaping the future of the smart, connected world -- and thus Intel's future."

In addition to the cloud, Krzanich touches on four additional technology themes he seeks to integrate into Intel's long-term strategy. These forces include the rise of the Internet of Things, coming improvements to memory technology, the rise of 5G connectivity, and lastly, the continued influence of Moore's Law to yield increasingly efficient chipsets.

Without question, Intel's future strategy represents a doubling-down on the continued rise of the data center, a generational growth market where Intel currently controls 99% of the market. Each of Krzanich's above points deals with either creating solutions for Intel to tap into new areas of the data center, or specific technological areas it will need to continue to lead to maintain its dominance. Either way, Intel clearly plans to hang its hat on the long-term boom in providing the computing power behind the increasing proximity between the real and digital worlds.

Right vision, not without its risks
Especially given the slow funeral march of the PC industry and ARM Holding's death grip on smartphone chip architectures, Intel's data center strategy makes plenty of sense. The economics in the space seem attractive. According to Intel, its data center, Internet of Things, and memory groups enjoy average operating margins in the range of 65%. What's more, the company sees demand for data center chips increasing at an average annual rate of 15% through the end of the decade, which should hopefully more than offset any continued weakness from the gradual contraction of its PC chip business. 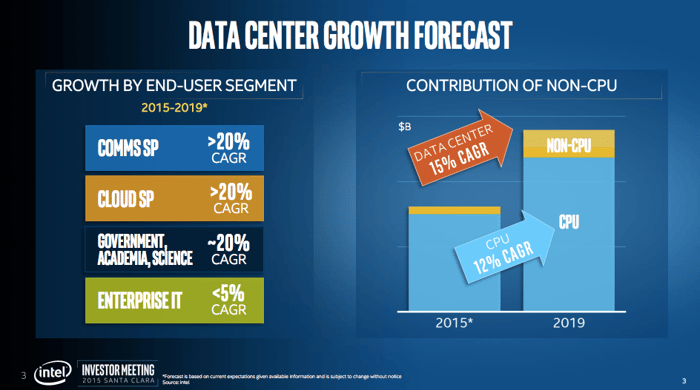 At the same time, Intel's all-in bet in this space isn't without its risks, primarily in the form of longtime semiconductor second fiddle AMD (AMD -3.66%). In fact, AMD's stock recently soared on its surprisingly strong earnings and the announcement of a new data center chip joint venture with Chinese tech outfit with a wordy name: Tianjin Haiguang Advanced Technology Investment Co., Ltd., or THATIC.

AMD's new joint venture should prove to be a revenue driver for the long-struggling company, but more importantly, it should also provide AMD a foothold in selling its server chips in the booming cloud computing market in China. In reaction to the AMD news, research analyst Ian Ing of MKM Partners commented, "The announced China Server JV with THATIC ... dramatically increases [AMD's] prospects to carve out share in the attractive $12B-$14B server chip market (AMD benefits via licensing and royalty collection). Best Challenge Yet to INTC Server Dominance..."

For Intel investors, AMD's China market ambitions only represent a portion, albeit an important one, of the broader server chip market. It also remains unclear when AMD will bring these chips to market. As such, it seems more appropriate to view AMD as a more serious threat than past years, rather than an equal to the undisputed market leader.

There's also the persistent rumor of companies such as IBM experimenting with servers running on ARM Holding's popular lower power chip architectures. However, like the AMD news, this remains largely an outlier story rather than a legitimate movement occurring within the space.

So, while Intel's road forward remains challenged, largely because of its placement at the epicenter of the PC market, the strategy reaffirmed in Krzanich's recent missive certainly seems like the most sensible road forward for the semiconductor stalwart.