Please ensure Javascript is enabled for purposes of website accessibility
Log In Help Join The Motley Fool
Free Article Join Over 1 Million Premium Members And Get More In-Depth Stock Guidance and Research
By Cory Renauer - May 5, 2016 at 3:47PM

A generous offer from Abbott pumped up shares of the heart device specialist.

What: Shares of  St. Jude Medical Inc (STJ), a company focused on the development, manufacture and distribution of cardiovascular medical devices popped 38.1% in April, according to data from S&P Global Market Intelligence. An extremely generous offer from Abbott (ABT -0.05%) to acquire the company was the culprit. 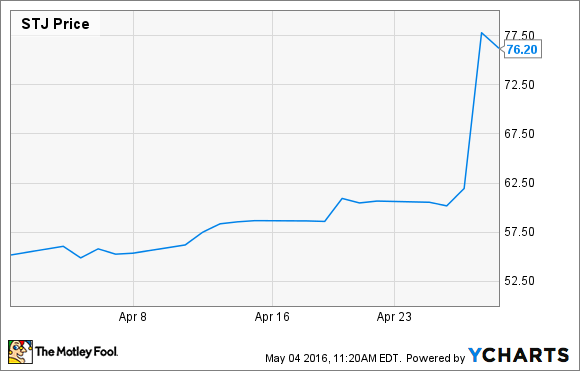 So what: With an aging society in the U.S., and abroad cardiovascular interventions are a long term growth market. In an effort to build up its cardio-device department, Abbott willing is ready to pay through the nose (figuratively) for a wide array of devices that will end up in patients' hearts (literally).

To St. Jude shareholders glee, Abbott offered $46.75 in cash ahd 0.8708 shares of Abbott common stock which valued the deal at nice even $25 billion based on the price of Abbott's stock before announcing the deal. 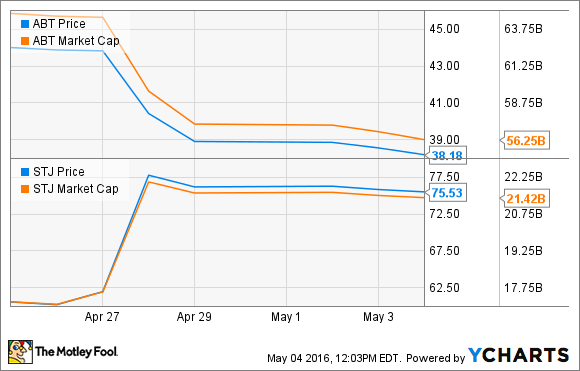 With M&A arbitrageurs scrambling to earn a few points before the deal's expected close in the fourth quarter of 2016 the final value of the transaction is anybody's guess. Abbott shares have plunged roughly 13% since the announcement, which at present, values the deal at a nearly even $80 per share of St. Jude stock.

Now what: Us Fools take the long view, and do not recommend M&A arbitrage, but buying up St. Jude shares at $75.53 today could bring in a tidy 5.91% gain by the end of the year. However, that's if Abbot's share price holds until the end of the transaction, and if the deal goes through in the fourth-quarter. St. Jude shareholders also must accept the deal, but that would be the least of your worries considering the premium.

One caveat I wish arbitrageurs would need to worry about is how Abbott shareholders feel about the deal. Much to my displeasure, we were not consulted.

Abbott intends to finance the transaction with debt, and by issuing roughly $3 billion in common stock. Following February's announcement to acquire on-site diagnostics maker, Alere, for $8.4 billion, Moody's put Abbott "on review" for a downgrade from its current A2 debt rating..

I'm going to play armchair CEO for a moment here (imagine a shouting voice): Announcing another $25 billion acquisition while on rating agencies' naughty list is ill-advised!

Besides, the cardiac device space is insanely competitive. I understand that Medtronic's Covidien acquisition, while sneaking into Ireland's lower tax bracket just before that door shut, made it difficult to compete with. I'm sure many shareholders would agree that Abbott would have been better off selling its vascular products segment, which has resorted to cutting prices to increase volume, just to tread water over the past couple years. 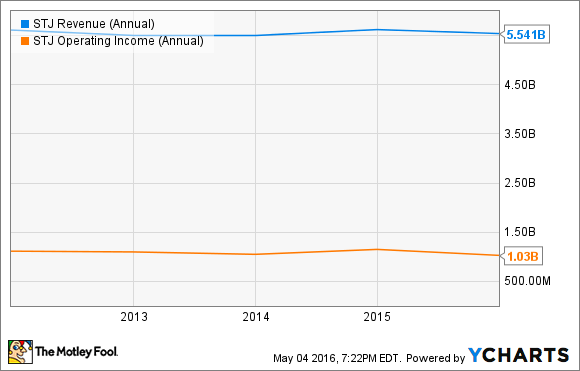 Instead it's willing to suffer a credit rating downgrade to buy a heart device maker that's had flat revenue for years.

Congratulations St. Jude shareholders, you just got lucky. Just pray Abbott doesn't come to its senses before the end of the year.

Cory Renauer owns shares of Abbott Laboratories and Medtronic, so he'll be just fine in the long run. You can follow Cory on Twitter @coryrenauer or connect with him on LinkedIn for more healthcare industry insight. The Motley Fool owns shares of Medtronic. Try any of our Foolish newsletter services free for 30 days. We Fools may not all hold the same opinions, but we all believe that considering a diverse range of insights makes us better investors. The Motley Fool has a disclosure policy.