Please ensure Javascript is enabled for purposes of website accessibility
Log In Help Join The Motley Fool
Free Article Join Over 1 Million Premium Members And Get More In-Depth Stock Guidance and Research
By Todd Campbell - May 24, 2016 at 9:46PM

The colon cancer detection company's shares recovered some losses from earlier this month. 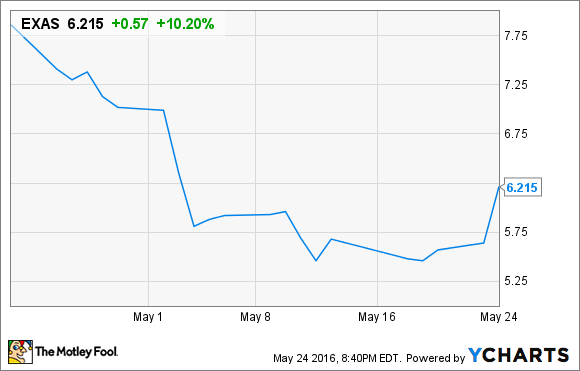 So what: Despite reporting revenue and profit in early May that outpaced expectations, the company's sales pace and lack of profitability continue to disappoint investors.

In the first quarter, management delivered revenue growth of 248% as prescription volume for its colon cancer detection kit skyrocketed. That would normally be a good thing, but management helped drive that demand by significantly increasing its spending, and that's got investors wondering when (or if) this company can turn a profit.

Exact Sciences' spending on cost of goods sold climbed by $4.8 million versus last year in the first quarter, and spending on advertising jumped by $9.2 million when compared with a year ago. Add those two figures together and you find that management bumped up spending by $14 million, only to see sales improve by $10.6 million.

Now what: Following the sell-off earlier this month, investors appear to be bargain-hunting.

The population of seniors who could benefit from the Cologuard kit is undeniably big and growing as more baby boomers move into their 60s. If Exact Sciences advertising can help establish its test as the go-to test among seniors, then it stands that the company's sales could climb significantly. Theoretically, the company could rein in spending once the number of kits reaches a tipping point, boosting margin and getting the company into the black.

However, investors might want to temper their enthusiasm. It may be years before the company begins selling enough tests to be at that magic tipping point. If so, then investing in Exact Sciences may not pay off until next decade. Given the risk of mounting losses, a patient approach to this company is necessary.