Investors continue to sit on the sidelines after the FDA delayed a decision on its hepatitis B vaccine in April.

What: After the Food and Drug Administration pushed back its decision date for the company's hepatitis B vaccine in April, shares in Dynavax Technologies Corp. (DVAX -0.42%) have continued to tumble, losing 12% of their value last month, according to S&P Global Market Intelligence. 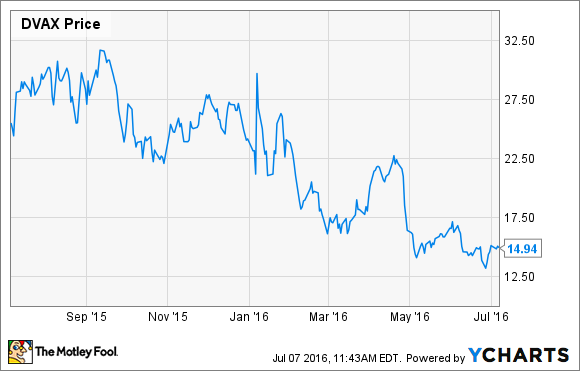 So what: Dynavax Technologies' investors are eagerly awaiting a go/no-go from regulators on HEPLISAV-B, a hepatitis B vaccine that -- if approved -- could become standard of care.

Currently, GlaxoSmithKline's (GSK 1.78%) Engerix-B is widely used to help curb the spread of this highly transmittable disease. An estimated 240 million people have contracted hepatitis B worldwide, and as a result, hepatitis accounts for roughly 80% of all primary liver cancers.

In spite of the availability of Energix-B, up to 20,000 people in the U.S. will still get infected with hepatitis B. One reason why is Energix-B's dosing schedule places a high burden on patients. Energix-B is given in three doses over six months.

Dynavax Technologies thinks that HEPLISAV-B's dosing schedule would significantly improve patient compliance. HEPLISAV-B is given via two does in one month. HEPLISAV-B may also work better than Energix-B in preventing the spread of hepatitis B. In trials, 95% of people receiving HEPLISAV-B were seroprotected, versus 81% of patients receiving Engerix-B.

Despite its advantages, the FDA rejected Dynavax Technologies previous application for approval of HEPLISAV-B in 2013 because of concerns that its use could result in autoimmune disorders.

Given the FDA's prior rejection, it's not surprising that it is approaching HEPLISAV-B's current application cautiously. Earlier this year, it requested additional information from Dynavax Technologies regarding HEPLISAV-B's safety. Unfortunately, when the company supplied that information, the FDA determined it constituted a major amendment to HEPLISAV-B's application. As a result, regulators pushed back the timeline for a decision to December from September.

Now what: The market for hepatitis B vaccines is measured in the hundreds of millions of dollars per year, so an approval could move the needle for this small-cap company. However, a rejection could be a big blow to Dynavax Technologies, and that makes the upcoming FDA decision a binary event.

Since it's unclear whether HEPLISAV-B's advantages can trump any of the agency's lingering safety concerns, buying Dynavax Technologies' stock is a risky proposition. It may be best to join others in sitting on the sidelines on this one until we have a better understanding of the FDA's position on HEPLISAV-B.