Real estate investment trust (REIT) investors have had it good for many years, as a low-interest rate environment has been extremely beneficial for these leveraged real estate vehicles. As REITs typically borrow heavily to finance their operations as well as to acquire properties, low rates mean REITs end up paying much lower finance costs, resulting in higher levels of cash to pay out to investors.

Investors would do well to remember that REITs tend to pay just the interest portion of their loans, and will roll-over the loan once the maturity date nears. Alternatively, the REIT could also look for an alternative lender (preferably with an even more competitive interest rate) to replace the loan that is coming due. 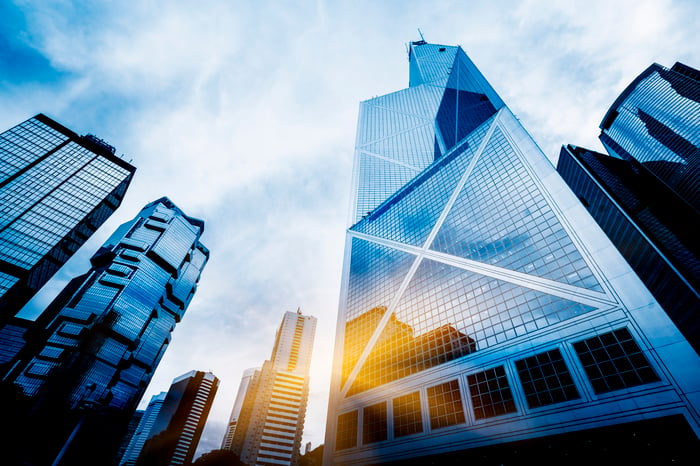 Hong Kong imposes a statutory limit of 45% in terms of gearing, and most REITs tend to keep their gearing levels below 40% just to be safe.

Though interest rates have remained low for an extended period since the end of the Global Financial Crisis back in 2009, investors may be wondering about the potential impact of a rising interest rate environment on REITs. Let's explore some of the effects that higher interest rates may have on REITs.

When rates eventually climb back up to normal levels, REITs may find themselves caught in a bind, as they now have to shoulder higher levels of finance costs. As REITs frequently increase their gearing levels in order to acquire properties for their portfolio, an increase in interest rate may thus dampen demand for M&A, as it will be tougher for REITs to secure cheap funding.

REITs may resort to a combination of debt plus equity to raise funds for acquisitions, with higher amounts of capital raised through equity compared with debt. This has the potential to make the transaction more dilutive and hence less attractive for unitholders.

In a rising interest rate environment, REITs that have debt coming due will be forced to refinance their debt at higher interest rates. This will sap more cash flows, all things being equal, and put more pressure on the REIT manager as total costs will start to rise.

The REIT could react by paying out a lower distribution per unit (DPU) as earnings are impacted by the higher finance costs. Recall that REITs have to pay out a minimum of 90% of their earnings to qualify for tax exemption, so DPU is directly proportional to the level of earnings.

Rising interest rates also have a direct impact on the real economy, as many businesses utilize debt to fund both their working capital and operations. As the cost of financing becomes more expensive, more companies may cut back on acquisitions or expansion, leading to a fall in corporate capital spending.

Companies that have binged on debt may start facing financial difficulties and be unable to properly service their loans. All these will crimp demand for leasing, whether it be office, industrial warehouse or retail space, and would flow through to negatively impact REIT occupancy rates. When occupancy rates are hit, rental income will also be impacted and REITs may report lower year-on-year revenues, net profit, and cash flows.

A scary scenario for weaker REITs

Though the above sounds scary, investors should note that weaker REITs tend to suffer more during bouts of interest rate increases as they may not have a credible sponsor and would also not have the reputation to attract strong tenants.

REITs with a stellar track record and well-located, quality properties and which are well-managed need not fear a rising interest rate environment.