An in-depth look at the leading art in the NFT industry this year. Here's what you need to know.

Non-fungible tokens, or NFTs, have been a hot investment theme the past couple of years. Although various uses for these cryptocurrency-based assets are still being developed, art investing has emerged as an early winner for NFT utility.

Traditional art investing is largely the realm of the super wealthy, but NFTs have opened the door for art buying and selling for the masses. Before you jump in, however, there are a few things you should know, including what the top NFT art out there currently looks like. 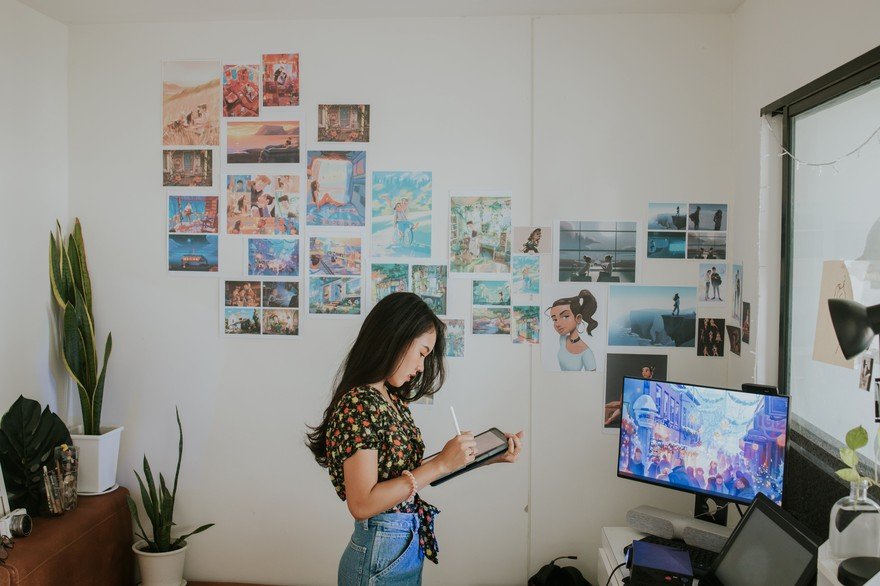 Think of NFTs -- or non-fungible tokens -- as digital certificates guaranteeing ownership of an asset. Most NFTs are built on the Ethereum (CRYPTO:ETH) blockchain network. Other blockchains like the Solana (CRYPTO:SOL) network are also increasing their presence in the NFT realm. For our purposes here, the NFT "certificate," regardless of which blockchain it's built on, guarantees ownership of a piece of digital art.

What is NFT art?

NFT-based art comes in all types. It could be a photograph, a picture made with digital media (using a computer screen and software instead of a traditional canvas and paint), a video, a musical composition, writing, even a video game. Basically, anything someone might consider digital art -- even physical art converted into digital form -- can be an NFT.

How does NFT art work?

Anyone can take a piece of creative work, mint it into an NFT, and then sell it on one of dozens of NFT marketplaces. If you want to be a digital art collector, have exclusive rights to a digital creation's use, or collect royalties from the use of digital art by others online, you can use these same marketplaces to purchase an NFT to guarantee your ownership.

NFT art has so far been highly speculative -- much as traditional art collecting and investing can also be a speculative game. The value of a creative work is subjective and determined by various intangible factors. For example, the reputation of the artist, the scarcity of their work, the quality and uniqueness of the art, as well as the demand and the price fellow art enthusiasts are willing to pay for the piece all have a bearing on value.

A key difference between NFT art and traditional art is that NFTs can be displayed and managed daily via a marketplace if you want. As a result, the value of these art assets can be determined with much greater frequency compared to a traditional piece of art that may be kept on private display or in storage for many years without the true current value being known.

NFT art can vary wildly in value. Some new works are given away for free or sold for just a few dollars, while a few have been auctioned off for millions. Here are some of the top NFT art opportunities out there:

The CryptoPunks, created by Larva Labs, are 10,000 unique pixelated portraits of various characters. Larva Labs is one of the earliest success stories in NFT art and based the project on Ethereum's blockchain. Originally given away for free in 2017, the CryptoPunk collection has since gone viral. Some portraits have been resold for millions of dollars, and the project remains one of the most financially successful NFT projects to date.

Artist Mike Winkelman, better known as Beeple, is a top NFT creator. In fact, the NFT-based picture Everydays: The First 5,000 Days, was auctioned by Christie's for more than $69 million in March 2021 and helped catapult NFT art into mainstream consciousness. Beeple continues to release a digital picture every day, a tradition that has now continued for more than 13 years, and his new work sells for large sums.

Pak is an anonymous top-selling digital artist (or team of artists). In December 2021, Pak's The Merge surpassed Beeple's work as the most expensive NFT ever sold, hauling in $91.8 million on NFT auction house Nifty Gateway. The art, which was sold as an open edition (an unlimited number of editions of an NFT) was purchased by nearly 29,000 collectors. Another Pak piece called Clock was sold for $52.7 million to a DAO (decentralized autonomous organization) called AssangeDAO, with proceeds going to the legal defense of WikiLeaks founder Julian Assange.

The Bored Ape Yacht Club (BAYC) is a collection of 10,000 unique comic book-style portraits of apes. Each piece is not only a collectible but also as a digital membership card that grants owners entrance into the virtual world created for the ape characters. The NFTs are sold out but can be purchased from existing owners via an NFT marketplace such as OpenSea. The most expensive BAYCs have sold for millions of dollars.

Axie Infinity is a blockchain-based video game created on Ethereum's network. Players compete using Axies, fantasy creatures that can be trained, bred to create new Axies, and bought and sold using Axie Shards. Axie Shards are crypto tokens that act as in-game currency based on the Ethereum blockchain. Axie Infinity has attracted hundreds of thousands of daily players worldwide, and the most expensive Axies can sell for hundreds of thousands of dollars worth of Ethereum. One Axie called Angel sold for 300 Ethereum in December 2020.

Crypto Baristas are the brainchild of Coffee Bros., a real-life coffee roasting business in New York City. The project's goal is to bring together fellow coffee enthusiasts as they bridge the NFT universe with a physical-world business. NFT sales will go toward funding an actual café in New York City focused on digital art and the metaverse, and each Coffee Baristas owner gets special Coffee Bros perks. Fifteen percent of Coffee Baristas revenue goes to a fund that will be governed by the NFT owners and used to support charitable organizations in the coffee industry or other NFT projects.

What is an NFT?

Tokens based on a blockchain, NFTs are used to guarantee ownership of an asset.

How to Invest, Buy & Sell NFTs from Digital Assets

What are the best ways to buy, sell and create NFTs? Here's a useful guide.

How to Make an NFT

Learn to design, produce, market, and sell your own NFTs.

How to Sell Non-Fungible Tokens (NFTs)

Walk through the ins and outs of selling your own NFTs.

It's early days for NFT art and digital creators

NFT art is a speculative endeavor, and collectors and investors shouldn't bet money they can't afford to lose. Digital art and collectibles can fluctuate wildly in value, and their value is subjective since it's based on what prospective buyers are willing to pay.

Nevertheless, it's early in the NFT movement, and NFT art has become one of the first use cases for the blockchain-based technology. NFTs could reshape what it means to be an artist and help creators monetize their work like never before.

Metaverse Comeback? The Surge in These 3 Cryptos Suggests It's Possible

2 Stocks With Multi-Bagger Potential to Buy in 2023