Please ensure Javascript is enabled for purposes of website accessibility
Log In Help Join The Motley Fool
Free Article Join Over 1 Million Premium Members And Get More In-Depth Stock Guidance and Research
By Maurie Backman - Aug 29, 2016 at 10:41AM

You'd think it would be the other way around, but year after year, more retirees identify as financially comfortable than non-retirees.

We hear a lot about how so many retirees wind up cash-strapped once they leave the workforce. According to 2013 Census Bureau data, older Americans in almost every state are sorely lacking the income they need to cover their living expenses. It's therefore somewhat surprising to learn that year after year, U.S. retirees feel better about their finances than non-retirees.

According to a 2013 Gallup poll, 75% of retirees claim they have enough money to live comfortably compared to just 67% of those still working. Furthermore, between 2002 and 2013, the gap between those who are financially comfortable versus those less so has averaged 10 percentage points in retirees' favor. 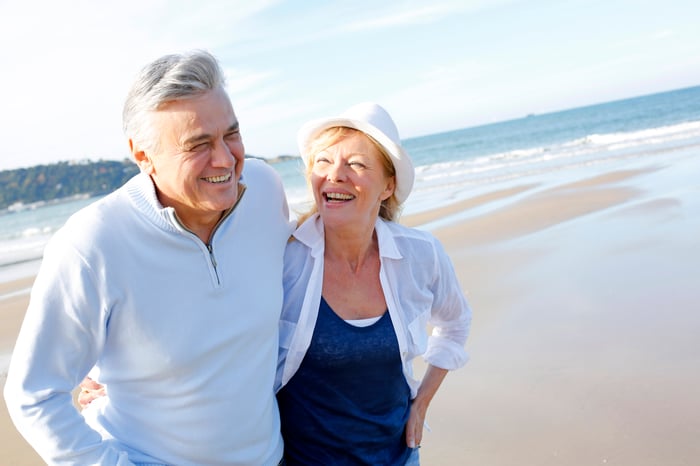 And it's not like retirees have more income to work with. Quite the contrary -- the same set of data reveals that only 22% of retirees report annual household incomes of $75,000 or more, whereas 35% of non-retirees claim to earn that much. In fact, the National Academy of Social Insurance reports that an estimated 65% of Social Security beneficiaries depend on the program to provide most of their retirement income, and it's the only source of income for almost 25% of Americans aged 65 and older.

So how it is that retirees are so financially comfortable? Are they better at managing their expenses, or do they simply have lower expectations?

Many financial experts will argue that retirees typically have lower living expenses than non-retirees. For one thing, they're less likely to be supporting their children than younger working Americans. In fact, the same Gallup poll tells us that only 4% of retirees have children at home under the age of 18 as compared to 39% of non-retirees.

Retirees also are more likely to own their homes outright than non-retirees, according to Gallup data. And while there are still other costs associated with homeownership, like maintenance and real estate taxes, eliminating a monthly mortgage payment can go a long way in freeing up extra cash.

On the other hand, there are certain costs that tend to be higher for retirees than their working counterparts. Healthcare, for example, is a major expense that tends to catch retirees off-guard. Additionally, while retirees don't necessarily spend more on leisure than non-retirees, they typically have a lot more free time on their hands than workers. It's therefore not unheard of for entertainment expenses to climb for those who stop working.

While it very well may be that some folks do indeed see their costs go down in retirement, it could also be that retirees approach financial stability from a different perspective than workers. And there are plenty of retirees who consider themselves financially well off as long as they have enough money to cover the basics and make ends meet.

Retiring in comfort -- whatever that means to you

Being financially comfortable in retirement is a good objective to aim for, no matter how that actually plays out in your head. To increase your chances of feeling financially secure once you're no longer working, come up with a plan early on and set some specific goals. If you want to travel extensively during retirement, plan for it and save for it. Don't expect the money to just magically appear.

Furthermore, while Social Security can help you pay your bills in retirement, it should by no means constitute the majority of your income. Social Security is only designed to replace about 40% of your pre-retirement earnings, which means you'll need to save independently if you want a strong shot at retiring in comfort. That means putting money into a retirement account as early as possible and investing that money wisely.

Of course, another way to increase your chances of being financially comfortable in retirement is to keep your expectations in check, and learn to be happy with what you have. Retirement doesn't have to be all about exotic vacations and evenings at the country club.

To an extent, retirement can be as expensive or affordable as you make it. As long as you live and spend within your means, you're likely to feel good about your financial picture.