Please ensure Javascript is enabled for purposes of website accessibility
Log In Help Join The Motley Fool
Free Article Join Over 1 Million Premium Members And Get More In-Depth Stock Guidance and Research
By Maurie Backman - Oct 7, 2017 at 9:18AM

Recent college graduates are postponing key milestones because of their debt, and they're not happy about it.

Given the ever-rising cost of college these days, accumulating piles of debt is slowly becoming the norm for students from all types of economic backgrounds. The average Class of 2016 graduate, in fact, came away more than $37,000 in the hole and, all told, Americans owe over $1.45 trillion in college loans.

But while taking on student debt might seem like a necessary step on the road to a college degree, it's also a move that can hurt you big-time. In fact, millennials aged 20 to 26 are sacrificing or postponing a host of key financial milestones because of their high levels of debt. It's not surprising, then, that 23% of grads in this age group feel that their education will never end up being worth the amount of debt they took on. That's the sentiment expressed during a TD Ameritrade study, which also found that younger millennials are putting many aspects of their lives on hold because they owe too much after college. 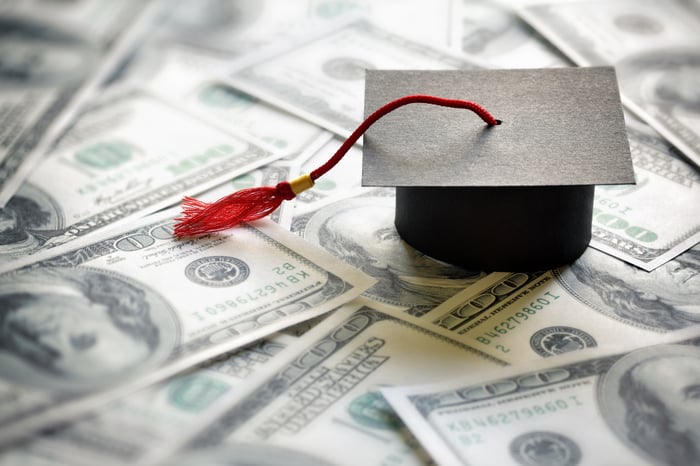 What recent college grads are giving up

It's natural to make sacrifices when you owe a lot of money for any reason, college or otherwise. But a large number of Americans are really stunting their financial growth because of their student loans. Of those surveyed:

And it's not just financial milestones that are falling by the wayside. A good 25% of college grads aged 20 to 26 have delayed having children because of their debt, while 21% have held off on getting married.

Of course, waiting to become a homeowner or start a family isn't ideal. But those who are neglecting their retirement savings because of their debt are putting their futures at risk.

A smarter way to approach college

Most people can't pull off a college degree without borrowing money. But there's a difference between taking on a small pile of debt versus a mountain of it.

If you'd rather your student debt not wreak havoc on your financial future, then you have several options to explore. First, consider attending the cheapest university possible. Unless you're entering a highly specialized program or field, it probably won't matter where you get your degree as long as your grades are respectable.

Here's a rundown of how much college tuition costs, on average, based on data from the 2016-2017 school year:

As you can see, there's a significant difference between the cost of tuition for community or in-state public college and out-of-state or private college. So if you can get away with the former options, do it. You can easily save roughly $100,000 over the course of your degree.

Another way to keep your borrowing to a minimum is to live at home while you study, and skip the dorm, which can tack $10,000 or more to your total bill each year. Furthermore, when borrowing for college, stay away from private lenders, which not only tend to charge higher interest rates, but also offer less flexibility for repaying what you owe.

Now if you're already in debt from college, you clearly can't go back in time and borrow less money. But what you can do is work on paying off your debt quickly so it doesn't continue holding you back. This might mean examining your budget, cutting expenses, and applying some of that extra cash toward your current balance.

But notice that I said "some of that extra cash," not all of it. That's because you should never, ever hold off on retirement savings in an effort to pay off your student loans. To build a solid nest egg, you'll need time to let the power of compounding work its magic. And if you limit your savings window, you'll lose out on key growth that could compromise your financial security in retirement.

Keep in mind that although your student loans obviously come with interest, if you invest wisely, your rate of return will likely exceed what you're currently paying (assuming that you have federal loans; private loans are a different story). For federal undergraduate loans given out beginning July 2017 and before July 2018, the interest rate is 4.45%. The stock market, meanwhile, sports a 9% average annual rate of return. Therefore, if you come upon extra cash, it pays to put it into your nest egg as opposed to using it to knock out your student loan balance sooner.

Finally, don't despair if you're carrying college loans well into adulthood. It's not an ideal situation, but know that student debt is the good kind to have, so while it may prevent you from meeting certain goals sooner, if you keep up with your payments, you'll have a nice opportunity to build your credit. And that's one silver lining to be thankful for.