About 58 million Americans get healthcare coverage through the Medicare program. Each year, healthcare costs tend to rise, and that typically results in increases in many of the costs Medicare recipients have to pay. Specifically, Medicare sets its premiums, deductibles, coinsurance payments, and other expenses based in part on its own cost experience. Let's look at some of the changes that will take effect for Medicare in 2018.

Hospital coverage through Part A

Medicare Part A provides hospital insurance coverage for Medicare participants. Most people don't pay a premium for their Part A coverage, because you can generally get free Part A if you or your spouse worked for 40 quarters at a job that charged Medicare payroll taxes. However, if you don't qualify, then you can still get Part A coverage as long as you pay a monthly premium. In 2018, the premium for those with 30 to 39 quarters of coverage will be $232 per month, up $5 from 2017's figure. If you have fewer than 30 quarters, then the monthly premium is $422, up $9 from last year.

2018 will also see higher deductibles and coinsurance payments for hospital coverage under Part A. You can see the increases in the table below, with coinsurance amounts varying based on length of stay.

Medical coverage through Part B

In contrast, many of the costs for medical care coverage under Medicare Part B will stay the same in 2018. For instance, the annual deductible for 2018 remains at $183 per year, which represents the amount you have to pay for doctor visits or other outpatient services before Part B coverage kicks in. 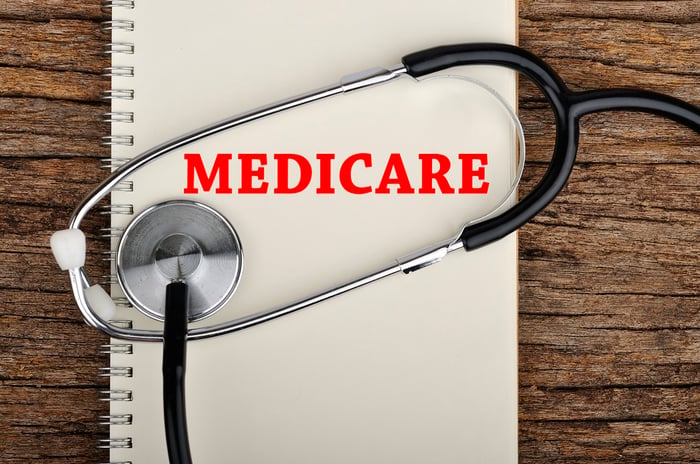 Part B's monthly premium is also slated to stay the same as in 2017, costing the typical participant $134 per month. However, one thing to keep in mind is that many Medicare participants haven't been paying the full $134 per month in 2017, and so they could see a sizable increase in their actual premium costs this year. The reason has to do with a law known as the hold-harmless provision, which prevents Medicare cost increases when Social Security cost-of-living adjustments are insufficient to cover the higher cost. The hold-harmless provision has kept premiums lower for about 70% of Medicare participants for several years now, but recent increases in Social Security benefits have finally started to undo the cost reductions. Even so, Medicare projects that more than a quarter of Part B participants will pay less than the $134 per month full cost in 2018.

If you have a high income while you're on Medicare, you'll also have to pay an additional amount for your Part B premiums, as seen below:

Those premium numbers are unchanged from 2017 levels, but the income brackets at which they apply are in some cases reduced. For instance, in 2017, it took $428,000 in income for joint filers to have to pay the highest $428.60 per month amount. Because higher-income individuals don't qualify for the hold-harmless provision, they'll pay the entire amount regardless of their benefits from Social Security.

It can be difficult for retirees to handle even small increases in living expenses, so the flat premiums for many Medicare Part B recipients are good news. Yet with the hold-harmless provision finally undoing its positive impacts over previous years, many retirees will nevertheless have to figure out how to deal with seeing more of their hard-earned money go toward Medicare in 2018.