Please ensure Javascript is enabled for purposes of website accessibility
Log In Help Join The Motley Fool
Free Article Join Over 1 Million Premium Members And Get More In-Depth Stock Guidance and Research
By Matthew Frankel, CFP® - Updated Nov 16, 2017 at 9:32AM

Medicare Part B covers your doctor's visits, flu shots, and much more.

If you're nearing retirement age, or if you're retired and simply haven't used your Medicare benefits yet, then you may be confused about the different "parts" of Medicare and what each one covers. Medicare Part B is also known as "medical insurance," and it covers most medical services and supplies other than hospital stays. Here's a more detailed explanation of what Medicare Part B covers and what it will cost in 2017. 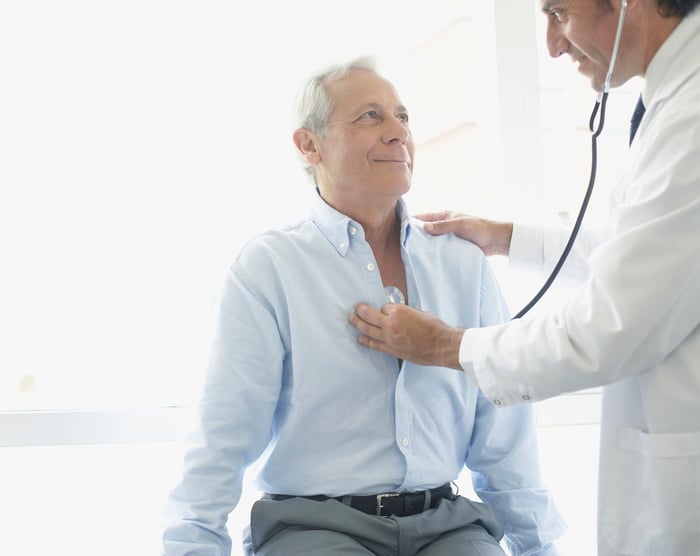 The "parts" of Medicare

Before we dive into a specific part of Medicare, let's go over the four parts of the program:

For the remainder of this article, we'll take a deeper look at Part B, medical insurance.

What Medicare Part B covers

In a nutshell, Medicare Part B, or "medical insurance," is the part of Medicare that covers most medical services and supplies other than hospital or skilled nursing facility stays.

More specifically, the coverage provided by Medicare Part B can be grouped into two categories: medically necessary services and preventative services.

This is the part of Medicare you would use when you see your doctor or have surgery. It also covers supplies that are deemed medically necessary, such as a wheelchair or a walker. Medicare Part B also covers ambulance services, but only if other transportation could endanger your health. For instance, if you're having a heart attack, Medicare Part B would cover ambulance transportation.

Preventative services covered by Medicare Part B include services like lab tests; screenings for conditions such as diabetes, heart disease, and cancer; and services intended to prevent diseases (such as your annual flu shot).

What Medicare Part B costs in 2017

The short answer is that the standard Medicare Part B premium is $134 per month. However, that's not what most beneficiaries actually pay. There are essentially three categories of beneficiaries, each with different premiums.

Finally, if your income is above a certain amount, then your Medicare Part B premiums will be higher. This is based on your modified adjusted income from two years ago (that's 2015 for this year) and your tax filing status. Here's a chart from Medicare.gov that can help you determine whether you'll pay a higher premium in 2017. All income numbers refer to MAGI from 2015.

Is Medicare in financial trouble?

You may have seen headlines about Medicare's financial troubles, so let's set the record straight. First of all, those headlines are referring to the part of Medicare that's funded by tax revenue -- Part A, or hospital insurance -- not Part B, which is funded mostly by premiums.

Also, Medicare Part A is in decent financial shape -- for now. The program has about $200 billion in reserves and is projected to operate at a surplus through 2020. After that, however, deficits are projected, and the Hospital Insurance trust fund is expected to run out in 2028.

So it's fair to assume that something will need to change in the coming years. This change may come in the form of a tax increase, benefit reductions, or privatization. If Republican leaders get their way, Medicare will be privatized by 2024 (which would definitely affect Part B). The exact changes that will ultimately be made are anyone's guest at this point, but the next few years could produce some big changes to Medicare.