Please ensure Javascript is enabled for purposes of website accessibility
Log In Help Join The Motley Fool
Free Article Join Over 1 Million Premium Members And Get More In-Depth Stock Guidance and Research
By Maurie Backman - Dec 14, 2017 at 9:18AM

Did you make any of these critical errors?

We all make money-related mistakes, and this past year was no exception. Without further ado, here were Americans' top 10 financial mishaps in 2017: :

Most of these aren't surprising. It's a known fact that Americans are glaringly behind on savings, with 57% of adults having less than $1,000 to their names and 39% having no money in the bank at all. Throw in the fact that credit card debt reached an all-time high this year, with borrowers accumulating over $1 trillion in outstanding balances, and it's no wonder so many Americans are now bemoaning their fate. 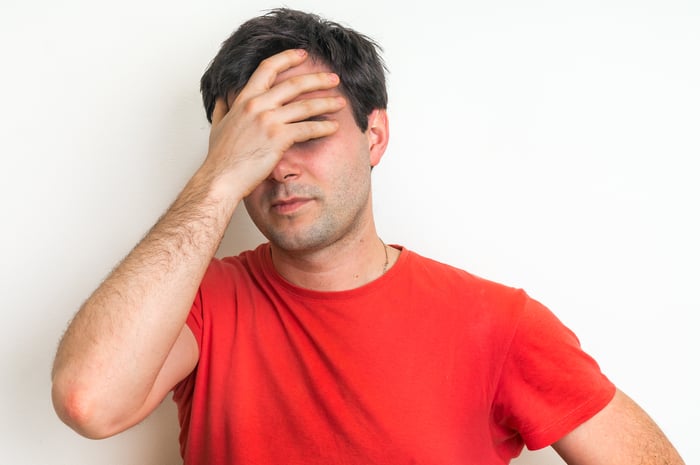 The good news, however, is that we're about to kick off a new year, and with that comes an opportunity to right our money-related wrongs and take steps to improve our financial outlook. Here's how.

The one thing you need to do to fix your finances

Many of these issues boil down to one glaring mistake, and a fixable one at that: not having a budget. It's estimated that a good 60% of Americans don't follow a budget despite the fact that it's probably the single most effective money management tool available. Once you have a proper budget in place, you'll see where your money is going and where you need to make changes. And that will help you avoid overspending, accumulating debt, and neglecting your savings.

Thankfully, creating a budget is simple. All you need do to is list your existing expenses (including those once-a-year bills that tend to creep up on you), compare what you're spending to what you're earning, and see where there's room for improvement. For example, if you're on the hook for a $200 monthly student loan payment, you probably can't do much about it. But if you're currently spending $300 a month on entertainment and restaurant meals, you do have the power to cut back in that category and bank the difference.

Even expenses like your rent or vehicle costs might be more negotiable than you thought. If the former is eating up too much of your income, look at downsizing or moving to a less popular neighborhood. If the latter is doing the same, consider unloading that vehicle if you can get by with the local bus. If you want a clean start to the new year, then you'll need to step up and start making some (reasonable) sacrifices.

Other mistakes to avoid

Though following a tight budget can reduce your chances of falling victim to several of the above blunders, you'll still need to understand the dangers of doing things such as neglecting your retirement savings, failing to invest, and depleting your emergency fund prematurely.

Let's start with retirement. Simply put, Social Security won't provide enough income to sustain you in retirement, no matter how much you earn or how frugally you think you'll live as a senior. It's therefore on you to start saving for the future independently, and the longer you wait, the less opportunity you'll get to take advantage of compounding.

Compounding is what allows you to turn a series of relatively small contributions into a decent nest egg over time. It's also the reason so many average earners end up retiring as millionaires. But if you don't start saving for retirement early on, you'll lose out on the beauty of compounded returns.

Still not convinced? Check out the following table, which highlights the importance of saving for retirement sooner rather than later:

Waiting even a few years to start funding your nest egg could put you at a serious disadvantage by the time retirement rolls around. Furthermore, notice that the above table assumes a 7% average yearly return, which is actually a few points below the stock market's average. What that sort of return allows us to do is take a total of $120,000 in out-of-pocket contributions and grow it into nearly $600,000 (as would be the case for someone who starts saving at age 25). But when we reduce that return to 2%, we wind up with just $181,000 after a 40-year period. And there lies the danger of failing to invest properly.

The solution? Go heavy on stock during your working years, and slowly move away from them as retirement nears. You need stocks in your portfolio if you really want to let the magic of compounding do its thing.

Finally, resist the urge to tap your emergency fund unless you're truly desperate for cash. Overindulging on your vacation isn't an emergency, nor is getting a new cellphone. Those are things you should, and can, actively save for, and if you use your emergency cash to cover non-essential expenses, you'll end up deeper in debt when a true calamity strikes, like a layoff or costly injury.

It's natural to have regrets about the things you botched financially this past year, but don't make the mistake of repeating those errors in 2018. Rather, understand where you went wrong and take steps to change your habits. With any luck, you'll be in a much better place financially come this time next year.