Please ensure Javascript is enabled for purposes of website accessibility
Log In Help Join The Motley Fool
Free Article Join Over 1 Million Premium Members And Get More In-Depth Stock Guidance and Research
By Maurie Backman - Feb 16, 2018 at 6:21AM

Though we don't tend to associate February with taxes, now's the perfect time to get your return in order.

If there's one area in which Americans tend to procrastinate, it's filing taxes. After all, the process is annoying at best, and stressful at worst. But new data from TD Ameritrade tells us that 47% of filers expect to complete their tax returns in February if they haven't done so already, and that's actually a very positive statistic.

Of course, not everyone gets the option to file early. If you're missing key tax documents, like some stray 1099 forms, then you might just have to wait for that paperwork to arrive before sitting down to complete your return. But assuming you have all of your documentation in place, there are plenty of good reasons to knock out that return in February as opposed to waiting longer. 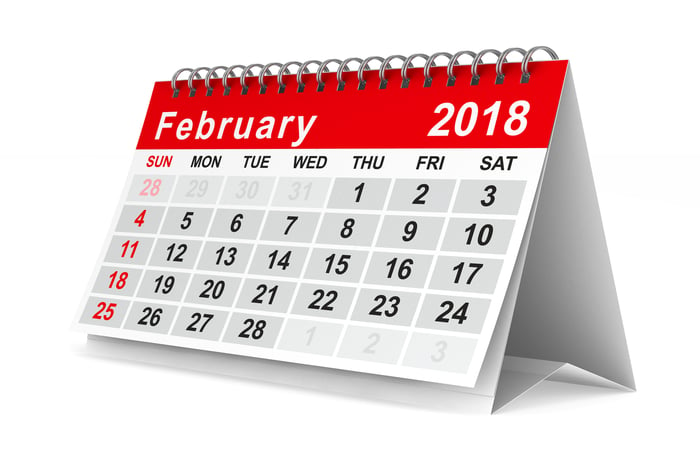 1. You'll get your refund sooner

Each year, roughly 80% of filers wind up getting a refund on their taxes. If you're expecting money back from the IRS this year, then it absolutely pays to submit your return sooner rather than later. And if you file electronically, you could snag that cash even sooner. That's because the IRS states that it typically issues refunds for electronic returns within three weeks of receipt, and if you sign up for direct deposit, you might further expedite that process. Given that most Americans are pretty behind on savings, having that refund in your bank account in late February or March, as opposed to late April or May, could spell the difference between covering an upcoming bill or having to take on more debt -- so if you're convinced you're due some money, get moving.

2. You'll be better equipped to deal with an underpayment

Though most tax filers get money back from the IRS upon submitting their returns, there are also those who end up owing money. And if you're one of them, that could spell trouble if you don't have the funds available in savings to cover that bill (which, as we just saw, is a distinct possibility).

The benefit of filing your taxes in February, as opposed to closer to the deadline, is that you'll give yourself more time to come up with the cash you need to pay your tax debt. Remember, just because you submit a return doesn't mean your IRS payment needs to go along with it. You have until this year's April 17 filing deadline to pay the IRS what you owe.

So if, for example, you come to learn this month that you underpaid your 2017 taxes by $600, you'll have a solid six weeks or more to come up with that money. And you might manage to snag a side hustle that pays you $100 a week, thereby accumulating the cash in time. But if you wait too long to prepare your taxes, you might end up scrambling to pay your bill. And if you don't pay on time, you risk accruing interest and penalties, thus adding to that burden.

3. You'll be less likely to make a mistake

Many of the folks whose taxes get audited aren't liars or criminals; rather, they're innocent people who happened to make mistakes on their returns. On the other hand, if you give yourself ample time to prepare your taxes, you'll be less likely to make an error that lands you on that dreaded IRS list.

An even better bet? Aim to prepare your taxes by the end of the month, walk away for a few days, and then go back and check your work prior to submitting. You're more likely to catch your own errors if you take a break and then revisit your return.

Though the tax filing deadline is still a good two months away, there's no reason to wait until the very last minute to get moving on your return. You're better off getting your taxes done with, and getting the peace of mind that comes with knowing you've just removed one major task from your over-loaded plate.