Navigating young adulthood isn't easy. Given the cost of college these days, millions of graduates come away from their studies deep in debt without a light at the end of the tunnel. Factor in entry-level wages, and it can be a real struggle for younger Americans to get on their feet financially.

It's not surprising, then, that young adults aged 18 through 34 continue to struggle with credit card debt. The average borrower in that age group owes $3,700, and more than half of those with credit card debt say they're having a hard time paying it off, according to a new report by Merrill Lynch and Age Wave.

But the desire to break free from that debt is driving a quarter of young adults to make a very unwise decision -- tapping their 401(k) plans early. One in four savers aged 18 to 34 has taken a premature 401(k) withdrawal, and the most common reason cited is to pay off credit cards. If you're thinking of doing the same to tackle your debt, consider this your warning to strongly reconsider. 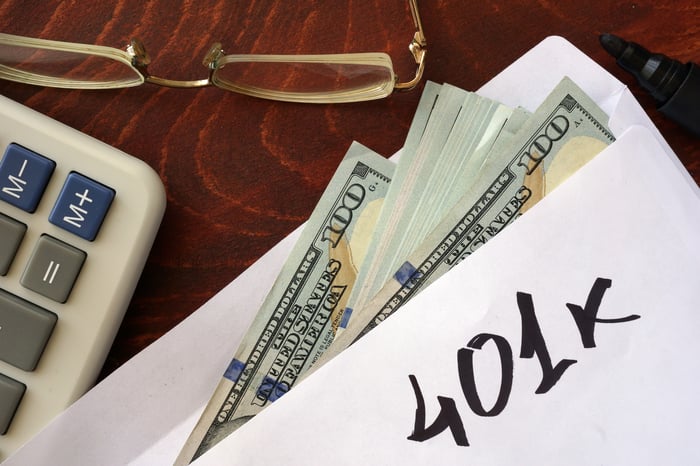 Taking an early withdrawal from your 401(k) might seem like a reasonable solution when unhealthy credit card debt looms. In reality, however, it's a very bad idea.

First, as you're probably aware, you get a tax break for contributing to a traditional 401(k) in that your money goes in on a pre-tax basis. As such, the IRS expects you to follow the rules and not touch that cash until you reach age 59 1/2. If you withdraw your money before then, you'll be hit with a 10% penalty on whatever amount you remove. You'll also pay taxes on your withdrawal, though to be fair, the same would hold true in retirement.

Now let's imagine you owe $3,700 on a credit card and are considering using the funds in your 401(k) to wipe out that debt. To do so, however, you'd need to remove far more than $3,700 to account for ordinary income taxes on that sum, coupled with the 10% the IRS will take from you. And that hardly makes sense.

Not only that, but any time you remove money from a 401(k) during your working years, that's income you won't have on hand in retirement when you'll need it the most. And it's not just the sum you remove that you'll lose out on -- you'll also forgo whatever growth that money could've achieved.

That's why raiding your 401(k) to pay off debt just doesn't make sense. If you want to get out of credit card debt quickly, review your budget and start slashing some larger expenses to free up more cash month after month. For example, if you typically spend $300 a month on restaurants and takeout, cooking those meals at home could put over $200 a month back in your pocket. At the same time, look at getting a side job and using your earnings from it to chip away at your debt until it's gone.

But for the love of your golden years, do yourself a favor and leave your 401(k) plan alone. The fact that you're able to fund one at a relatively young age is great, but don't negate that by tapping that account when you're supposed to be letting it sit and grow.