Please ensure Javascript is enabled for purposes of website accessibility
Log In Help Join The Motley Fool
Free Article Join Over 1 Million Premium Members And Get More In-Depth Stock Guidance and Research
By Kailey Hagen - Aug 17, 2019 at 8:16AM

One financial crisis is steadily creating another.

Student loan debt has become a $1.5 trillion crisis in the U.S., sparking a lot of talk and increasingly more concrete plans for reform. We know it's hurting young adults' finances and sometimes their credit at that crucial stage when they're first trying to launch their careers, but the true effects of this debt crisis may not be felt for decades.

Nearly 84% of young adults with student loan debt say that their loans are negatively impacting their ability to save for retirement, according to a survey sponsored by TIAA and conducted by MIT AgeLab. Those who aren't able to overcome this challenge are far more likely to end up running out of money in retirement. Here's a closer look at how student debt affects retirement savings and what you can do to beat the odds. 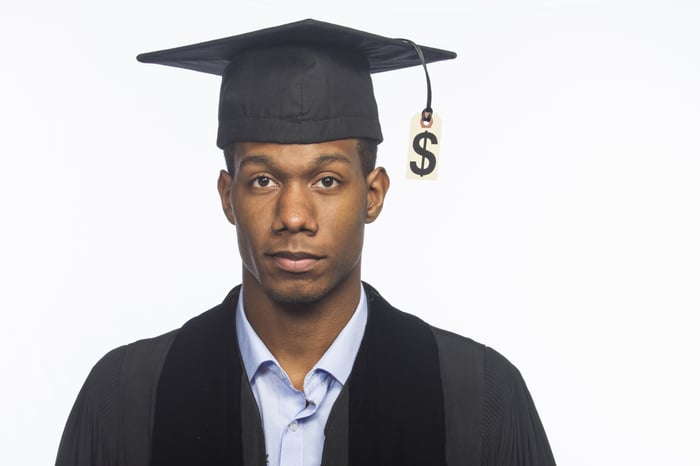 The TIAA-MIT AgeLab survey found that participants with higher levels of student debt tended to have less retirement savings. This is understandable, because these young adults have to put their money toward their student loans first to avoid ending up in default and ruining their credit. But their inability to save for retirement in their early years will place a greater burden upon them for the rest of their adult lives.

While sticking to the standard federal student loan repayment plan could have graduates debt free in 10 years, many take twice as long to pay back their student loans. A study by Citizens Financial Group found that 60% of student loan borrowers can expect to carry student loan debt until their early 40s. If you're unable to prioritize retirement saving until your student loans are paid off, you've just lost 20 years of valuable investment growth.

This is an extreme example, because many young adults are still able to set aside something toward their retirement while still paying off student loan debt, but it still illustrates an important point. Your younger years are the most valuable years in terms of retirement savings because those contributions have longer to compound before you need to begin drawing upon them. If you have to delay retirement savings until later, you'll have to set aside more each month in order to have enough to cover all of your retirement expenses.

How to save for retirement when you have student loan debt

Ideally, you'll be able to save for retirement and pay off your student loan debt concurrently, but when this is not an option, you may have to prioritize your student loan debt to avoid going into default. While it's tempting to choose the repayment plan that charges you the least per month, go with the one that charges the most that you can comfortably afford. This will minimize how much you pay in interest over the lifetime of the loan and will help you pay it off faster.

If you qualify for student loan forgiveness programs, like public service loan forgiveness (PSLF) or military or teacher loan forgiveness, pursue them. If you meet all of the requirements, the government will pay off your remaining loan balance. This doesn't apply to private student loans, though. Some employers are also starting to offer student loan repayment assistance as an employee benefit, so that's another option you could consider.

Take advantage of other employee benefits, like a 401(k) match if it's available. This is free money that reduces some of the retirement savings burden on you. But be mindful of your company's vesting schedule. If you leave the company before you're fully vested, you could lose some or all of your employer-matched funds.

Consider cutting spending or looking for ways to boost your income, like starting a side hustle, if you're struggling to save enough for both retirement and your student loan debt. It's tempting to think you'll have plenty of time for that later, but as the example above illustrates, the earlier you can begin saving for retirement, the less you'll have to put away each month. Set up automatic contributions to your retirement account (if it allows you to) so you don't have to remember to set aside money every month.

Even if you try the above tips, it probably won't be easy, but just because retirement appears to be a more distant concern doesn't mean that saving for it is any less important than paying down student loan debt. If you're struggling to come up with a plan that accommodates all of your goals, speak with a financial advisor who can offer you advice tailored for your situation.