Retirees commonly expect their living costs to go down once they're no longer working, but many seniors are shocked to discover that retirement is a more expensive prospect than anticipated. And a big part of the reason boils down to healthcare.

Healthcare is the one expense that tends to rise for seniors, and there are a few reasons for that. First, Medicare often leaves retirees with gaps in coverage, not to mention hefty premiums, deductibles, and coinsurance. Also, health issues tend to arise as people age, and more vigilant monitoring is generally needed. All told, healthcare can be a true burden -- the extent of which may come as a shock to some retirees. 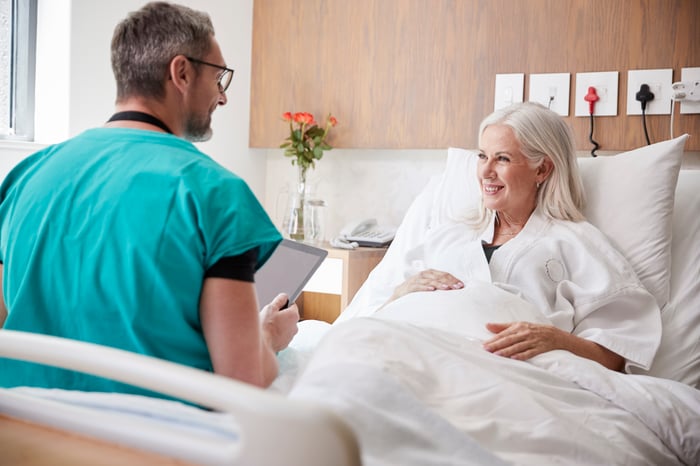 What the average retiree will spend on healthcare

The amount you end up spending on healthcare throughout retirement will depend heavily on the specific state of your health and the Medicare choices you make. But in its latest analysis, HealthView Services reports that a healthy 65-year-old couple retiring in 2021 will spend a total of $662,156 on medical bills during retirement. This projection assumes that the typical couple in this boat will live until ages 87 (male) and 89 (female). It also notes that the average couple will spend 68% of its Social Security benefits on healthcare.

If that $662,156 figure is spread out over a 23-year retirement, on average, that still leaves the typical couple to spend an alarming $28,789 a year, or $2,399 a month on healthcare. And that's something all seniors will need to prepare for.

If you're wondering how, you have some options. Padding your general retirement savings is a good bet, because the more money you sock away in your IRA or 401(k), the easier it'll be to tackle all of your bills, healthcare included.

Another smart move is to max out a health savings account (HSA) year after year, only instead of taking withdrawals from that account to pay for near-term expenses, pay for those out of pocket and reserve that cash for retirement. Any money in an HSA that you don't use immediately can be invested for added growth, and then both gains and withdrawals can be taken tax-free to cover qualified medical expenses.

Eligibility to participate in an HSA depends on being enrolled in a high-deductible health plan. The definition of that changes annually, but in 2021, it's a deductible of $1,400 or more if you're saving on your own behalf, or $2,800 or more if you're saving on behalf of a family. From there, you can contribute up to $3,600 to next year's HSA if you're single, or up to $7,200 if you're funding an HSA at the family level. And if you're 55 or older, you'll get a $1,000 catch-up on top of whichever limit is applicable to you.

Many seniors are caught off-guard by just how expensive healthcare is. But with some smart planning, that doesn't have to happen to you. Like it or not, healthcare inflation keeps outpacing the general rate of inflation, which means you'll really need quite a bit of income at your disposal to keep up. Save wisely and efficiently so caring for your health later in life doesn't have to become its own source of stress.

How Much Will Healthcare Cost in Retirement? The Answer May Shock You. @themotleyfool #stocks Next Article
Current