Please ensure Javascript is enabled for purposes of website accessibility
Log In Help Join The Motley Fool
Free Article Join Over 1 Million Premium Members And Get More In-Depth Stock Guidance and Research
By Maurie Backman - May 28, 2016 at 8:07PM

Hint: It's kind of scary.

You've probably heard that most Americans aren't saving nearly as much as they should for retirement. But it's not just carefree 20-somethings putting retirement savings on the back burner. According to a recent survey by GoBankingRates, about 30% of those 55 and over admit to having no retirement savings whatsoever.

Meanwhile, 26% report having balances of less than $50,000, which is far behind where the average person in that age group should be. And while the study confirms that Americans on the whole are failing to save adequately, it's older Americans without savings who have much more to worry about. 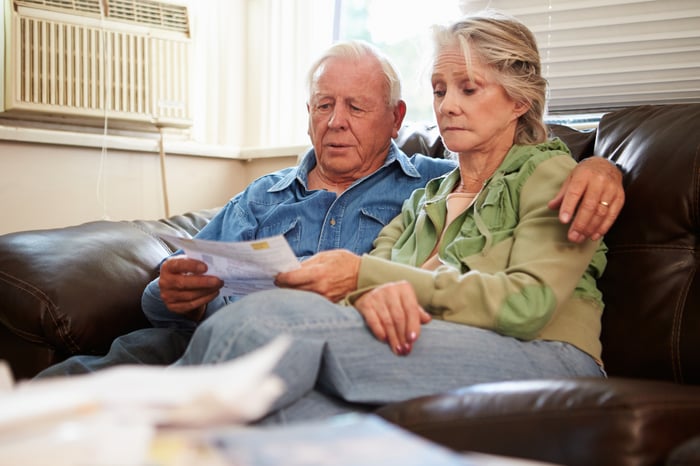 Without independent savings, many older Americans will be forced to rely solely on Social Security income during retirement. The problem there is that Social Security is only designed to replace 40% of the average American's pre-retirement income. Most of us will need anywhere from 70% to 80% of our pre-retirement income once we retire, and some of us might need even more -- especially those with medical conditions requiring costly care. Failing to save for retirement now means running the risk of not having enough money to live on once you're no longer working. And that's a very scary prospect.

There's still time to catch up

If you're already part of the 55-and-older crowd, you may only have a decade and change to start saving for retirement, but that's still a decent amount of time to build up sizable savings. Anyone 50 and older is allowed to contribute up to $24,000 to a 401(k) and $6,500 to an IRA each year, and those numbers might go up in the future. If you need to catch up on retirement savings, take advantage of these contribution allowances and the tax benefits that come with them.

If you haven't been saving for retirement at all, then you may not be able to ramp up your savings from $0 to $2,000 a month, but even half that amount will go a long way over the course of a decade. Imagine you save $1,000 a month, or $12,000 a year, and your investments generate an average annual return of 5%. (Keep in mind that this is a conservative estimate and that you might earn even more.) After 10 years, you'll have grown your savings to just over $150,000, which can go a long way in retirement.

Don't say no to free money

At a time in your life where saving for retirement is key, the last thing you should do is pass up free money. If your employer has a 401(k) matching program, then at least contribute enough to take advantage of whatever incentive your company offers. Americans leave an estimated $24 billion each year on the table in unclaimed 401(k) matching dollars. If you're behind on savings, you can help yourself by snatching up that match.

Let's say your company is willing to contribute up to $1,200 a year to your 401(k) in matching dollars, but you fail to capitalize on that savings opportunity. In that case, you're not just losing out on the principal contribution; you're also losing out on the potential gains that money could bring in. Imagine getting $1,200 in free money every year for 10 years, and investing that money at a 5% average annual return. After a decade, you wouldn't just have $12,000 extra; you'd have an additional $15,000 for retirement.

Of course, the challenge for many folks in their 50s boils down to needing their money for other things, whether it's to pay their kids' college costs or finance home repairs and improvements. But at this point in your life, it's time to put retirement savings above all else. Your children can take out loans for college, and while you can't neglect that leaking roof, you don't have to build that sunroom or finally finish your basement. When your retirement savings balance isn't up to snuff, your initial priority should be to start building it up -- period. The other stuff can wait.

If you're already 55 (or older) and behind on retirement savings, then it's definitely not too late to change your ways, but you also don't have a ton of time on your side. The sooner you start saving, the better your chances of reaching your financial goals.