Many or all of the products here are from our partners that compensate us. It’s how we make money. But our editorial integrity ensures our experts’ opinions aren’t influenced by compensation. Terms may apply to offers listed on this page.

The power of proportions in financial analysis.

In accounting, a vertical analysis is used to show the relative sizes of the different accounts on a financial statement.

For example, when a vertical analysis is done on an income statement, it will show the top-line sales number as 100%, and every other account will show as a percentage of the total sales number.

For the balance sheet, the total assets of the company will show as 100%, with all the other accounts on both the assets and liabilities sides showing as a percentage of the total assets number.

The following example shows ABC Company's income statement over a three-year period. We'll use this as the starting point to do a vertical analysis. 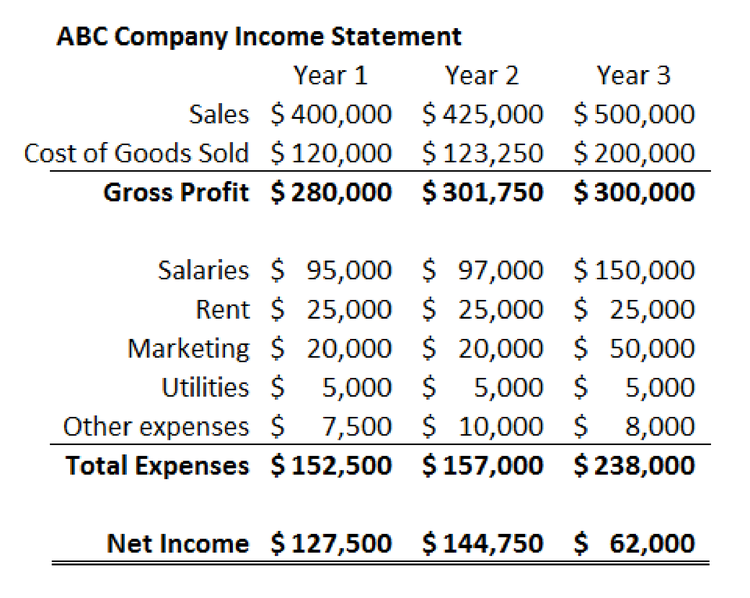 First, we should review the income statements as they're presented in dollar terms. The company's sales have grown over this time period, but net income is down sharply in year three. Salaries and marketing expenses have risen, which is logical, given the increased sales. However, these expenses don't, at first glance, appear large enough to account for the decline in net income.

To see exactly what's happening, we'll have to dig deeper.

To do that, we'll create a "common size income statement" and perform a vertical analysis. For each account on the income statement, we divide the given number by the company's sales for that year.

By doing this, we'll build a new income statement that shows each account as a percentage of the sales for that year. As an example, in year one we'll divide the company's "Salaries" expense, $95,000 by its sales for that year, $400,000. That result, 24%, will appear on the vertical analysis table beside Salaries for year one.

Here's how that table should look when completed. 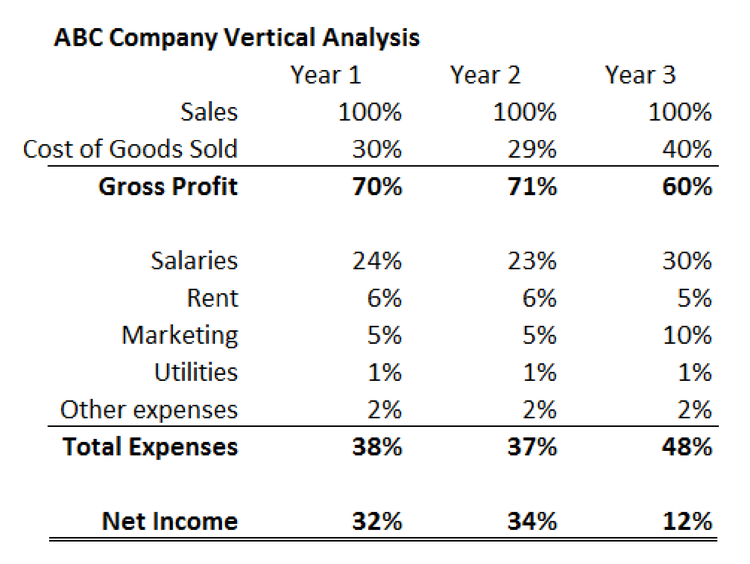 The vertical analysis confirms what we already observed in our initial review of the income statement, and it also reveals the missing driver in ABC Company's net income decline: costs of goods sold.

The vertical analysis also shows that in years one and two, the company's product cost 30% and 29% of sales, respectively, to produce. In year three, however, cost of goods sold spikes to 40% of sales. That's driving a significant decrease in gross profits.

This change could be driven by higher expenses in the production process, or it could represent lower prices. We can't know for sure without hearing from the company's management, but with this vertical analysis we can clearly and quickly see that ABC Company's cost of goods sold and gross profits are a big issue.

Other uses and benefits of a vertical analysis

The same process applied to ABC Company's balance sheet would likely reveal further insights into how the company is structured and how that structure is changing over time.

A vertical analysis is also the most effective way to compare a company's financial statement to industry averages. Using actual dollar amounts would be ineffective when analyzing an entire industry, but the common-sized percentages of the vertical analysis solve that problem and make industry comparison possible.

A useful tool in your toolbox

A vertical analysis (compared to a horizontal analysis) is excellent at showing what is happening within the financial statements of a company, but it cannot answer the most important question of any analysis: "Why?"

In ABC Company's case, we can clearly see that costs are a big reason profits are declining despite the company's robust sales growth. What we don't know, and what we can't know from the vertical analysis, is why that is happening. Did costs rise? Did management cut prices? Was it a bit of both? The vertical analysis raises these questions, but it cannot give us the answers.

The Motley Fool has a disclosure policy.
Many or all of the products here are from our partners that compensate us. It’s how we make money. But our editorial integrity ensures our experts’ opinions aren’t influenced by compensation. Terms may apply to offers listed on this page.