Budget Variances: How They Can Help You Create an Accurate Budget

Budget variances are common in the business world. Find out how you can learn from your variances to prepare a more accurate budget for your small business.

A budget variance is the difference between the amount budgeted for revenue and expenses and the actual amount received or expended. Budget variances can be favorable (more revenue) or unfavorable (higher costs).

Learn more about budget variances and how they can help you create a more accurate budget for your small business.

Overview: What is a budget variance?

In business, a budget variance is the difference between revenue and expenses that have been budgeted for and their actual totals.

Most of us have had to deal with budget variances on a much smaller scale. Remember when you budgeted car repairs at $500, but when you went to pick up your car, the bill had magically risen to $850? That’s a budget variance.

Business owners run into the same problem on a much larger scale. Some variances are expected for any prepared budget, and the variances themselves can be favorable or unfavorable, depending on the variance itself and the budget category it’s in.

Having an accurate budget is essential for smaller businesses that have less room for error. Whether you’re preparing a financial forecast or a flexible budget, the goal of budget preparation is to estimate revenue and expenses as accurately as possible. But no matter how well-prepared you are during the budgeting process, you’re going to have variances.

But it’s not enough to simply know the amount of the variance. It’s also important to remember that behind every budget variance calculation is a reason why that variance exists.

5 reasons why your business may experience a budget variance

There are a lot of reasons why your budget totals may not match up with the actual totals. New business owners can have a difficult time estimating expenses when they have little data to go by.

In other cases, budgets are pulled together hastily, with little prep time involved, which can result in inaccurate budget totals and high variances. If you’re wondering why your budget is so wildly inaccurate, one or more of the following may be the reason why:

1. No data to measure against

Financial projections for new business owners can be hit or miss. It’s difficult to estimate revenue and expenses for the year when you have no baseline data to measure against. On the bright side, even if your first-year budget is way off, your variances should go down once you start preparing your budget for your second year in business.

Budgeting is a long, methodical process that only produces accurate results if proper planning has taken place. As a business owner, it may be your inclination to prepare the budget yourself, but getting the input of staff and department heads will make your budget more accurate and more useful.

Unexpected events can seriously affect your budget. Not too many people plan for a disaster, but they do happen. Fires, floods, recessions, and pandemics can also impact your budget. I can guarantee that when companies were preparing their budgets in 2019, no one could have been prepared for the financial impact 2020 would have on their business.

While it’s difficult to plan for catastrophic events, it can be helpful to have a buffer built into your budget to help safeguard your business, especially when one of these once-in-a-lifetime events occurs.

Cost adjustments are one of the major reasons for unfavorable budget variances. Since most budgets are prepared at year-end, any notification received from a vendor or supplier regarding a price increase can be included in your new budget.

But if your supplier doesn’t notify you about a price increase but then raises prices in March of the following year, you’ll have an unfavorable budget variance to deal with. The best way to avoid this is to build an automatic price increase into your budgeted expenses.

Your business exists because you provide your customers with something they need or desire. But what happens when they no longer need or desire what you’re selling?

Rachel owns a bed and breakfast. When she budgeted for 2020, she was conservative and only increased her customer level by 10%, which was justified by a hike in both advertising and marketing efforts. While her budget was fairly accurate for the first two months of 2020, for the balance of the year her revenue has seen a huge drop, resulting in an unfavorable budget variance of more than 65%.

While Rachel could not predict the COVID-19 pandemic, she’s facing an increasing revenue slide for the foreseeable future because her customer’s needs changed.

Changing customer needs aren’t usually as drastic as dealing with a pandemic. But it’s important to frequently reevaluate the products and services that you sell to be sure they’re still fitting the needs of your customers. 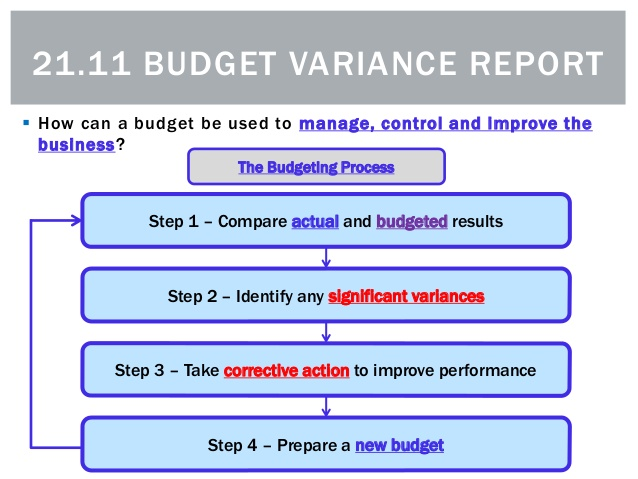 The budgeting process involves comparing your budget to the actual totals to find the variances. Source: slideshare.net.

How to monitor and analyze budget variances

It’s easy to monitor budget variances. Any accounting software application that includes even basic budgeting will be able to provide you with a budget vs. an actual report. If variances are numerous, it can also be helpful to create a revised budget for the balance of your fiscal year.

Keeping up to date on budget variances can help you spot possible trends, as well as potential trouble spots. If you only run this report once a year, you’re missing the opportunity to be proactive about any variances because it’s better to investigate them as they occur rather than at year-end. Be sure your report displays positive and negative variances in both a dollar amount and a percentage.

Research the ‘why’ behind the variance

If you didn’t hit your budgeted revenue, you need to ask why. If your expenses are twice what you budgeted for, you need to find the reason for the variance. It’s assumed that your initial budget was prepared using accurate baseline figures and that revenue was estimated based on past performance. If that’s true, then it’s up to you to find the cause behind the variance.

Adjusting budgets mid-year is a common occurrence, particularly if you find revenue and expenses significantly differ from their budgeted totals. If the variance just occurred once, you probably don’t have to worry about revising your budget, but if it looks to be a more permanent issue, it’s best to make some changes. 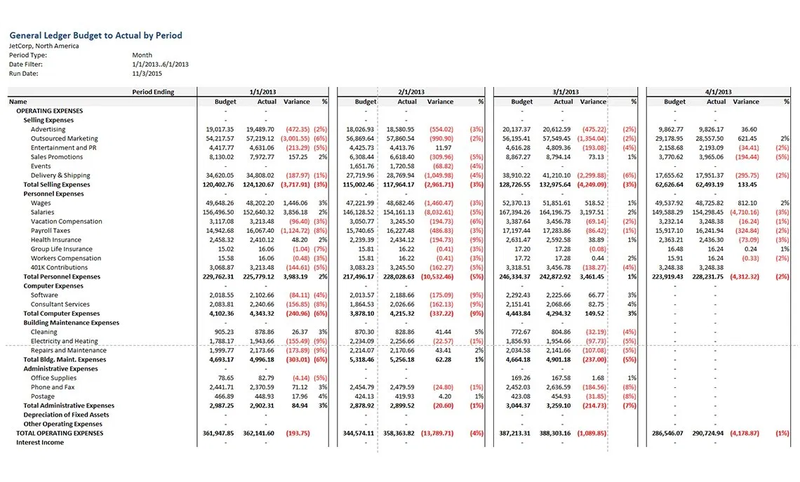 How to use your budget variance analysis for future forecasting

Your budget variances can provide a lot of valuable insight into preparing your next budget. Look at where you were spot on and where your variances were fairly high, and spend some time analyzing both results to see what was behind them.

Keep in mind that an unfavorable variance that is out of your control requires less action than one that was simply inaccurate. For example, if your supplier suddenly goes out of business, the ripple effect of that act can wreak havoc on your budget, including a drop in revenue due to backorders, or an increase in costs due to using a new supplier.

With less revenue and higher expenses, your budget will be seriously impacted. At this point, it might be a good idea to create a revised budget that accurately reflects the increased costs and lower revenues.

However, if your variances are a one-time issue, it’s best to continue to monitor your budget but forego the revisions unless other issues arise.

In some way or another, we all operate on a budget. For example, if you make $30,000, you probably won’t be purchasing a million-dollar home. The same principle applies to businesses. No business earning $30,000 in revenue is going to purchase a manufacturing facility for $2.1 million. That’s why budgets are so important — and why they must be accurate.

Every day, business decisions are made based on a company’s budget, and the repercussions of acting on erroneous numbers can be fatal, particularly to small businesses with limited resources to fall back on. For example, if a project budget runs over, it could end up costing you thousands of dollars.

Take the time to create a budget based on facts and past performance, and resist the urge to be too optimistic (or pessimistic) about the numbers. Use those budget variances to create a more accurate budget for the coming year.