Schedule variance measures how your project is progressing against your schedule. Here's how to calculate it and why it matters for your business. We’ll look at some examples, too.

In project management, failing to keep things on schedule can trigger a causal sequence that can be catastrophic for the overall project.

That’s because according to the triple constraint, also known as the project management triangle, which illustrates the relationships between the three major constraints of time, cost, and scope, any change in one affects the other two.

To achieve a healthy balance, constant monitoring and analysis are paramount. Project leaders should employ various project management techniques to track and measure the project’s progress.

One such technique is earned value management (EVM). It functions as an early warning device that alerts project managers to possible problems so they can manage them.

Schedule variance (SV), a subset of EVM, measures how well a project is doing vs. pre-approved timelines.

Overview: What is schedule variance in project management?

Schedule variance indicates whether your project is on schedule, behind schedule, or ahead of the project schedule — and by how much. It calculates the difference between the cost of the actual work completed (earned value) and the cost of the planned work to be completed as of today (planned value).

Schedule variance measures how much the project is deviating — or varying, as the word “variance” in the name suggests — from the schedule to date.

To further illustrate the concept, consider the graph below. 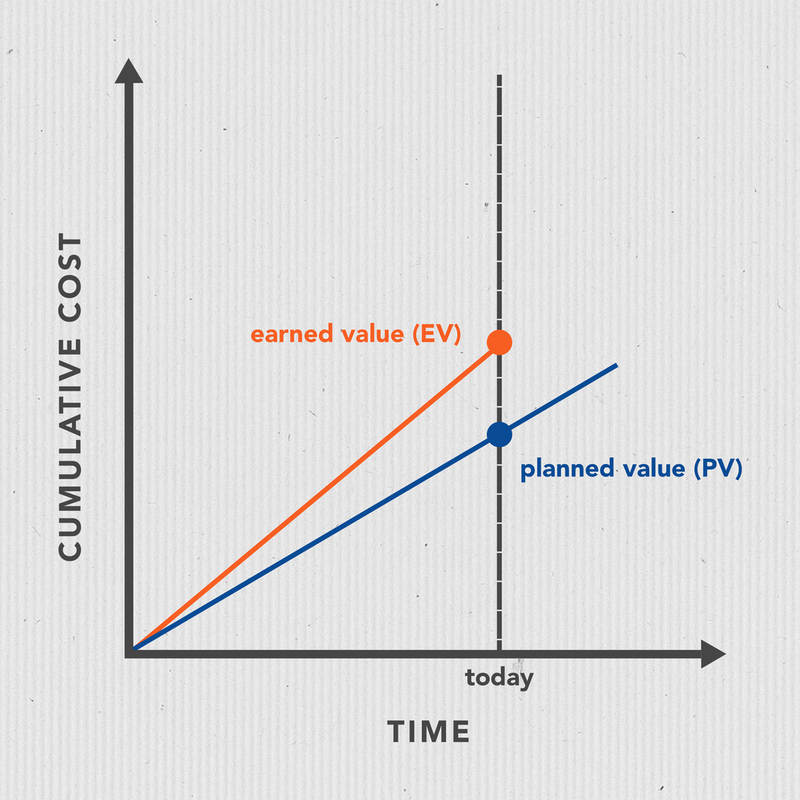 The earned value is greater than the planned value. This means, as of today, you did more work than planned. Therefore, your project is ahead of schedule.

Both schedule variance and cost variance are earned value analysis components. They calculate variances, which are measurable changes or deviations from a baseline or standard.

Both are critical for monitoring and communicating the project’s progress, detecting problematic baseline deviations, and adjusting to stay on course if necessary.

To compare, the schedule and cost variance formulas are expressed as follows:

You can learn more about cost variance and see some examples if it's still unclear.

Why is schedule variance important for small business project management?

One way to underscore the importance of staying on schedule, which is ultimately what schedule variance is about, is by recognizing the negative consequences of project delays.

If you factor in overtime and additional resource expenses to make up for the difference between the actual and planned schedule, you end up with a project that’s bound to go over budget sooner rather than later.

A business has cash flow problems if it’s unable to pay its bills and expenses when they come due, and small business owners are no stranger to cash flow challenges.

When your company depends on your projects being completed on time to pay its debts and fulfill its obligations, the schedule variance lets you know if you’re on track.

Contracts protect the parties involved in a transaction. If you’re contractually bound to deliver a project by a certain date, and you’re unable to do so, lawsuits may follow, especially if the other party loses revenue or cannot fulfill its own obligations as a result of your failure to meet your project deadlines.

Some projects don’t make it to the end, and the inability to meet deadlines or “deviation from [the] timetable” is one of the major reasons. In this case, some companies feel it’s more prudent to cut their losses than incur more costs — or worse, debt — than they can afford.

If you’re unable to meet your timeline requirements, clients and higher-ups may lose faith in your ability to deliver timely results. Being mindful of your SV in project management allows you to:

How to calculate schedule variance

Let’s say you’re working on a house renovation project, and you have a cost and schedule breakdown that looks something like this:

I pulled the numbers out of thin air, so please pardon me if they don’t reflect reality.

After one week, you go back to your spreadsheet to see how your team is doing. You now have the following:

Although these numbers are all essential project data, they don’t say right away what you want to know: Are the renovations on schedule This is where schedule variance comes into play.

To reiterate, the schedule variance formula is:

To find the earned value, which is the value of the actual work completed to date, multiply the percentage of the actual completed work by the project’s total budget, also referred to as budget at completion (BAC).

The formula for earned value is:

Using the above formula to arrive at the earned value of the kitchen renovation, we have:

To find the planned value, which is the approved value of the work scheduled to be completed to date, multiply the percentage of the planned completed work by the project’s budget.

The formula for planned value is:

Since the kitchen has a completion schedule of 15 days, after seven days, completed work should be 46.67% (divide 7 by 15). Using that formula to get the kitchen renovation’s planned value:

Now that we have both the EV and PV, we’re ready to find the schedule variance (SV = EV - PV):

Since $333 is a positive number, the kitchen renovation part of the project is ahead of schedule. It also shows that you’ve completed an additional $333 worth of work than planned.

When you’re done finding the SV for each segment of the project, your spreadsheet will now look like this:

Both the kitchen and bathroom renovations are ahead of schedule, while the bedroom side of the project is behind schedule.

Another EVM formula that compares actual project performance against the schedule is schedule performance index (SPI), which measures how close the project is to planned completion to date.

SPI in project management is calculated as follows:

If the SPI result is:

Going back to the kitchen renovation example:

This SPI figure indicates that the project is ahead of schedule. It also means that for every hour of work, your team is completing work that’s worth 1.07 hours.

Updating the spreadsheet further to include SPI, we now have:

SPI reinforces what SV already indicates. Both the kitchen and bathroom renovations are ahead of schedule, while the bedroom project is running behind.

In the project planning phase, project performance details are fleshed out, including how you plan to tackle project risk management. But even sound planning and scheduling can’t save a project if your tracking and monitoring practices aren’t up to par.

With schedule variance, not only do you have a simple, easy-to-understand number that indicates how your project is faring against the schedule, you also know by how much — allowing you to pivot as necessary and steer the project back on track if needed.

If you need help communicating relevant schedule and cost data with your team, plus a place to keep all project-related documents on demand 24/7, check out some of the best project management software options The Blueprint has reviewed so far.