Forget the gender pay gap: Women who have children are even more likely to suffer financially and career-wise. Here's how to fight back.

Most of us are familiar with the gender pay inequality debate, and how women only earn about $0.77 for each dollar brought in by similarly qualified male counterparts. But here's a new reason to get angry about the infamous wage gap: New research from the Kauffman Foundation shows that a woman's income decreases with each child she has, and by 4% at that -- not a small amount. But here's the kicker: That same data also finds that men's incomes increase by an average of 6% when they have children. And that's a pretty tough discrepancy to swallow.

When motherhood and work don't mesh

We all know that child care is a huge burden for new parents, so much so that the lower-earning spouse in a given couple will often decide to take time away from the workforce rather than bear that cost. Not surprisingly, it's mostly women who end up going the stay-at-home route, but when this happens, their careers tend to suffer. When women take long leaves of absence, their skills tend to wane and their marketability tends to follow suit, which means that once they're ready to return to the workforce, they're often penalized in the form of lower-level jobs and lower earnings. This, in turn, puts not just women, but families with children, at a sizable financial disadvantage. 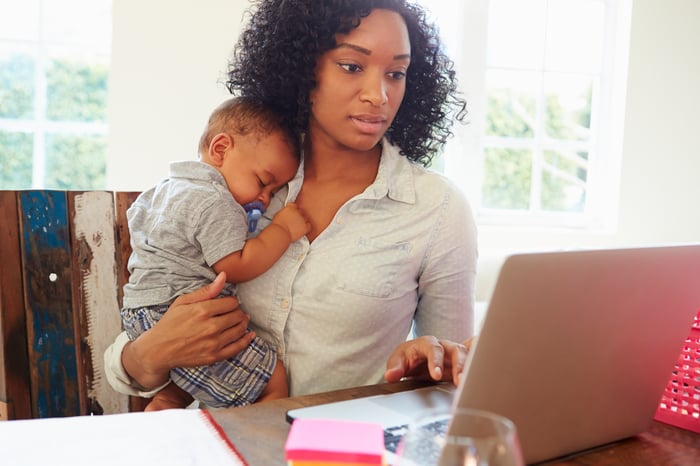 All of this tells us one thing: Women who plan to have or raise children need to be proactive in protecting both their finances and their careers. Here's how.

1. Save before having kids

It's ironic that women's salaries tend to go down after having kids, because that's the precise point at which their living expenses are likely to rise. To avoid a financial struggle early on in parenthood, you'll need to focus on building a safety net. At a minimum, be sure to set aside enough money to cover three months' worth of living expenses, and the more you're able to exceed that threshold, the more protection you'll have.

2. Boost those work skills before bringing children into the mix

Though taking time away from work can impact both men and women alike, since females are more apt to suffer after a career hiatus, the best defense comes in the form of boosting your skills before having children. This mean might obtaining a professional license or certification, or taking some courses to increase your personal value as an employee. If you go into parenthood with a high level of qualification, you're more likely to emerge from whatever type of leave you take unscathed.

FSAs, or flexible spending accounts, can help ease the burden of paying for a new child's medical care and child care. There are two types of FSAs: healthcare and dependent care. For the former, you can allocate up to $2,650 per year to cover eligible expenses like doctor visits, medications, and hospital copays. For the latter, you can set aside up to $5,000 each year (assuming you're a single tax filer or couple filing jointly; otherwise the limit is $2,500) to pay for child care expenses, such as day care or preschool, that allow you to work (or look for work). Because both accounts are funded with pre-tax dollars, you'll save money by virtue of lowering your IRS bill.

4. Network during your leave

Whether you take a few months or a few years off after having a child, one of the most critical things you can do for your career is stay in touch with your business contacts and associates. Check in regularly, keep them apprised of your situation, and use them as a knowledge source so you don't fall behind professionally. The latter is particularly important if you're taking an extended leave from the workforce, because if you're in an industry where things change rapidly, losing out on that information could put you at an even greater disadvantage.

Clearly, women have their share of professional hurdles to overcome -- and having children only makes things all the more challenging. The more prepared you are, the less likely you are to fall victim to the inequitable treatment so many women face.