Most of us strive to get promoted at our jobs and gradually work our way up. But what if you suddenly find yourself in the opposite scenario -- you're demoted and stripped of key responsibilities in the process?

Taking a step down isn't always a product of poor performance. When companies merge, for example, it's often the case that two people are left to fill the same position, and rather than fire the less qualified individual, that person is demoted to a lower-level role instead. Still, it's a demoralizing situation to say the least, so much so that your first inclination might be to pick up and quit. But here are a few good reasons not to jump ship just yet, and see how that demotion plays out. 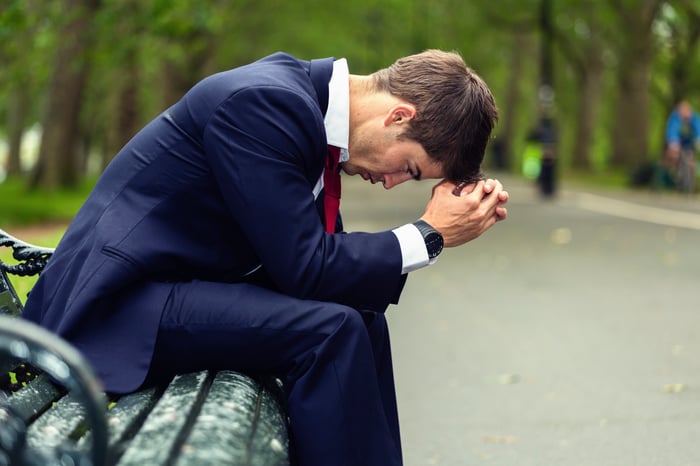 1. It could be a blessing in disguise

Imagine you fought hard for a promotion, only to wind up miserable once you actually moved up a level. Many employees think they want that better title until they realize that longer hours and increased stress loads come along with it. If you're unhappy with the impact your promotion has had on your life, or realize you were promoted too soon and feel that you're in way over your head, then a demotion may not be such a bad thing after all. If anything, it could save you from having that uncomfortable conversation during which you beg to go back to your former job.

2. It may not hurt you financially

If your demotion comes with a lower salary than what you're used to making, then you'd be more than justified in resigning. But that doesn't always happen. In the case of a merger or consolidation of teams, you may find that while you're losing some responsibilities, your paycheck is staying the same. If that's the case, then it's sort of a win-win -- less work and pressure for the same amount of money.

3. The timing is bad to leave

If things are stable in your personal life and you're given a demotion, you may want to take your skills elsewhere and find a position that keeps you at your current level. But if it's a bad time in your life to be out of a job, or searching for one, then you might consider staying put.

Imagine you're expecting a baby in the coming weeks, and find out you're moving down a level at your current company. Can you really afford to quit and potentially go without health insurance when you're about to expand your family? Similarly, if you're dealing with a health issue that could require extra time out of the office, you may be better off staying put and getting that flexibility, as opposed to having to start a new gig on shaky ground.

4. It could open the door to different opportunities

Maybe you've gotten demoted because your company is going through changes and needs to shift people around. While that may seem like a bad thing at first, don't discount the possibility of a better offer opening up once your management team gets its priorities aligned. You might, for example, get pushed back down a level, only to find two months later that a better, higher-level position is available to you -- in which case waiting things out would be beneficial.

Getting demoted isn't always the crushing blow you'd expect it to be, but if you can't in any way see the positive in that news, then you may be better off composing that resignation letter and moving on. On the other hand, there may be a silver lining behind that demotion, and if you're able to find it, it often pays to see where it leads you.

Should You Ever Accept a Demotion at Work? @themotleyfool #stocks Next Article
Current