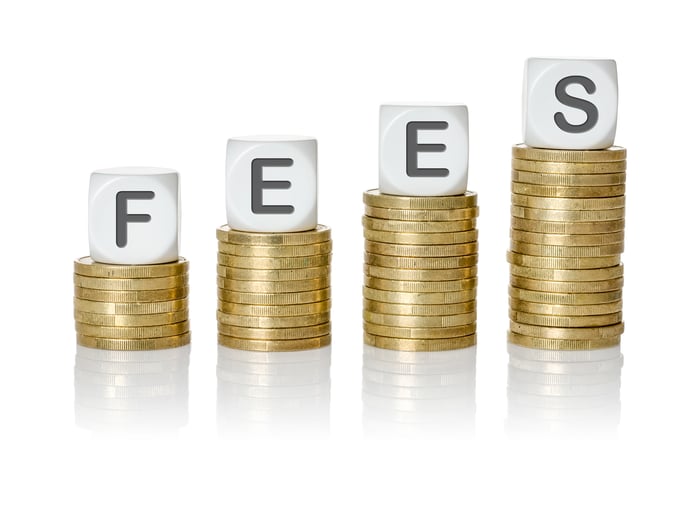 Meeting -- or better yet, beating -- your long-term financial goals tends to come down to cutting fees and other out-of-pocket costs. The same can be said for winning with credit cards. Fees can eat into the rewards credit cards offer, and they often extend the time it takes to pay off debt when using balance-transfer cards. This is why cardholders should keep an eye on the fine print and may even be best off applying for a no-annual-fee credit card.

With that in mind, Motley Fool credit card specialist Nathan Hamilton and Deputy Managing Editor Michael Douglass give you the skinny on two credit card fees that can be easily avoided. While they aren't "hidden," they're easy to overlook.

Hamilton: Yes, absolutely. When it comes down to it, just as we say with investing, the best thing you can do to achieve above-average returns is just slash fees.

Hamilton: So whether you're in a mutual fund, cut those fees. ETFs. Anything. The same applies for credit cards when it comes down to it, because credit cards, if you are not careful, are going to tack on a bunch of fees that [are] not so much hidden, but they're easy to overlook.

Douglass: That's kind of like those budget airlines. You're paying a couple of bucks for a soda, and then it's like $50 for the baggage, and then suddenly it ends up being a lot more expensive than maybe your typical airline would have been, [to the point] where trying to save money didn't really work out for you.

Douglass: So let's start with cash advances. Now, this is the idea of basically using your credit card like an ATM.

Hamilton: Yes, and that's just a bad recipe right there. First off, with cash advances you're going to be hit with a fee double whammy: You're going to be charged a transaction fee (generally about 3%), to actually get access to the money. And then after that, you receive a pretty high card interest charge, an APR, which many times for many cards is in the high 20s. [That], for credit card interest, is extremely high.

Now, you can't borrow that much with a cash advance, generally, for most cardholders, but you're going to be paying a huge amount of money and essentially be getting hit with two different fees for doing so.

Douglass: Absolutely not something you want to have happen to you. Let's talk about late payment fees. These are a different sort of double whammy, because it's not only that you're going to pay a lot of money, but then it will also impact your credit score, too, potentially.

Hamilton: Yes. I mean, you've got the tangible fees and then the intangible, where you talk about the impacts to your FICO score. Maybe you then can't get the best mortgage rate. It's all a snowballing effect when it comes down to it.

With late payment fees, it's pretty obvious: If you miss your payment by the due date, you're going to be charged a fee.

Hamilton: Most credit card issuers are going to give you a little bit of a longer leash if you call them up and say, "Hey, guys. I messed up. OK, I missed one [payment]. Can you refund [the fee]?" Many times they will, but they're not as lenient on the second time, the third time, and so forth. And why it's important for your credit score is, 35% of your FICO score is based upon payment history, so that's just a matter of paying your obligations when they come due.

And, as we mentioned before, if you have a bad FICO score because you missed a payment a few times, and you then go in to get a mortgage, you may have to pay tens of thousands of dollars more over the life of that mortgage, and that's all for just late payments. So it's really important just to stick to the budget [and] ensure you can meet your monthly obligations. I think of a credit card almost as a debit card -- as if there's money in the bank backing it -- [and] I can pay it every month [without] so much borrowing on credit.

Douglass: Absolutely. Nathan, thanks much. For more on credit cards and personal finance, check us out at fool.com/creditcards. There's a lot of good information, there, including some of our top credit card picks for 2017. Nathan, thanks for joining us. For The Motley Fool, I'm Michael Douglass.