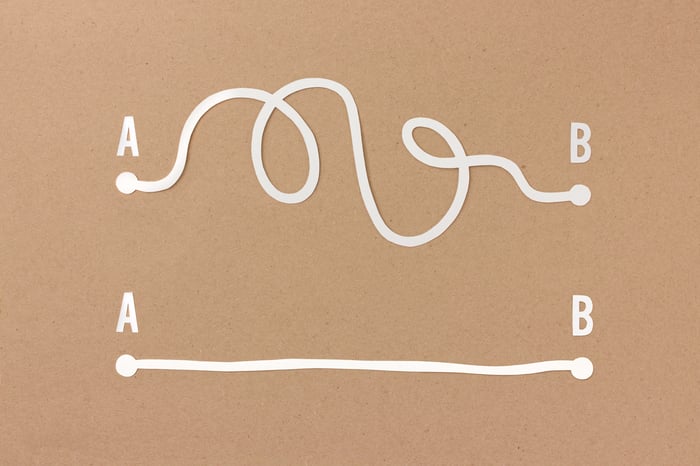 Chances are that credit card holders who end up in debt are missing the mark on hitting budgeting goals and maintaining an overall good sense of debt hygiene. If that sounds like you, implementing a simple budgeting plan could help pay off debt faster.

The Motley Fool analysts Michael Douglass and Nathan Hamilton talk in the video below about one real-life budgeting plan that has helped to avoid credit card debt.

Michael Douglass: Jack asks, "My wife and I have some credit card debt we've been paying off for a few years. What are some ways we can bring that balance down faster to start saving more money sooner?"

Nathan Hamilton: I would look at it, maybe my budget plan is helpful, I don't have any specific tips, but maybe how my wife and I budget can be helpful. We essentially break our month down into thirds. We set a budget for those 10 day periods. So, day 1-10, we have our budget, and I set alerts on our credit cards, so if we go over it, we know we're overspending.

Douglass: What do you do in February?

Hamilton: What it does is help us keep track of our spending and where we are. Sometimes we'll go over, sometimes we'll come under. But every 10 days, approximately, is when I pay down our balance, just to see how we're spending and keeping within that budget. Now, beyond that, it just takes some lifestyle changes. It's just a matter of running through your expenses, and you can get an app like Mint or Personal Capital, even your credit card provider or bank will probably show you a breakdown of your spending. And you can look at that and say, "Where am I spending too much?" The answer is probably going to be on food, restaurants, entertainment expenses and so forth. But, those are easy ways to cut those expenses. Perhaps grocery shopping and earning rewards instead of dining-out purchases are going to make sense. But, I don't have any specifics beyond just how we do it.

Douglass: Sure. And one of the other things that can help is that a balance transfer card can be useful for something like that. Again, if you are in a spot where you are paying off debt. So, you already have good debt hygiene insofar as you're taking control of that and making sure that you're reducing that over time, a balance transfer card, which usually offers an introductory 0% APR for, it depends on the card, but sometimes 12-15 months, can be really beneficial because essentially, if you were paying, I'm going to make up a number here, $300 a month into your credit card company, $200 of which was interest and $100 of which is principal, then suddenly you can be paying that same $300, but it's all principal for those 12-15 months, and that's a chance to really shrink that debt very quickly. Of course, after that introductory period, then the interest charges start hitting. But that at least gives you a chance to reduce that and hopefully completely eliminate it in the meantime.