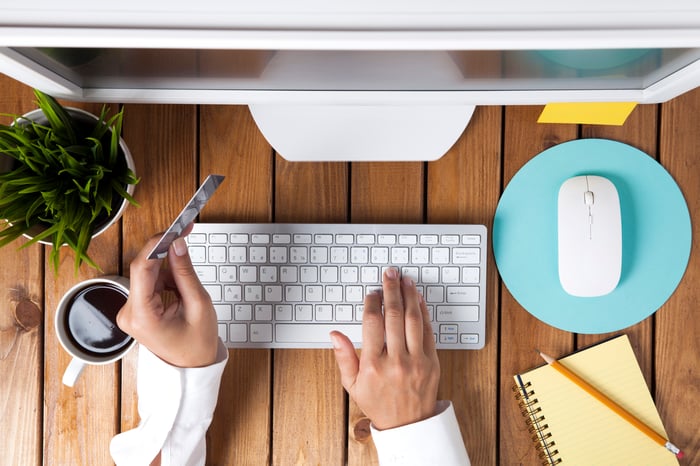 It's one of the most frequent questions we Fools receive about credit cards and credit scores: Should you cancel an old credit card?

The Motley Fool analysts Michael Douglass and Nathan Hamilton answer this question in the video segment below. Tune in to uncover one reason why it's smart to keep an old credit card open to help your credit score, and the counterpoint of why cancelling an unused card makes sense.

Michael Douglass: Don asks, "I have a few low limit credit cards I rarely use. Should I cancel them? How many credit cards is too many?" Don, that is a great question, thank you for sharing it. The first thing we have to throw out there is kind of a disclaimer that we can't speak to anyone's specific personal circumstances, so what's going to differ a little bit by the person. Without knowing everything about you, we can't really say. But, that said, there are some general rules of thumb we can talk about. One of the things that matters in credit scores is average length of account. If you have a credit card that you've had for 20 years, that's lengthening that average age of account, and that's a positive as far as the credit bureaus are concerned.

Nathan Hamilton: Yeah. Looking at it, why you would want to keep it open and why you would want to close it, there are two instances. If you are not incurring an annual fee and you're able to increase your average account age, there's no harm in keeping it open. The counterpoint to that argument is, any account open does leave you susceptible to fraud. So some people say close down the card because you are susceptible for those reasons. But looking at it, you really have to balance it, and say, "Do I want to potentially increase my FICO score over time? Or am I worried about fraud?" And then make the decision from there. But in terms of keeping the card open, setting aside the fraud issues, you do get a benefit for your credit score by establishing that longer average account age.

Douglass: The other thing that I'll throw out there is, generally speaking, when we're thinking about credit cards, this isn't true for everyone, there are definitely people who like the idea of having a credit card for the gas and having a credit card for the restaurants and a credit card for the travel, but generally speaking Nathan and I personally tend to lean toward having what Nathan calls a "Swiss army knife" credit card. That's this idea that you have essentially one card that covers most of your stuff that generally aligns with your purchases, and then maybe you have one more card. Let's say you're traveling consultant and you spend a lot of money on travel, then it might make sense to have a specific travel card as well just so you can maximize that. But the difference between optimizing your credit cards for your spending by 70% versus 100% might be a difference of several cards, and that's a lot more work that you have to do to keep them up and figure out which card to use when. So, that can cause a lot of mental load when there are opportunities for you to do other things that can boost your finances. Whether it's thinking about how you can save more, picking up a side hustle, something like that, or whether it's just relaxing so you can have the mental bandwidth and energy to make really good financial decisions long-term.

Hamilton: Yeah. That comes from a history of my experience with credit cards. I have been at points where I had more than I could count on one hand credit cards in my wallet. Trying to keep a budget is difficult then because -- I do work off of a monthly budget, and trying to track spending across those multiple cards, logging into this account to see what I spent, logging into that account to see what I spent, to back it in and say, "I'm on target for my budget," that's very difficult to do. I know there are apps out there that do help with that, but for my personal situation, I found it was much easier just to start with one card that fits the majority of my spending, then a Swiss army-style knife for the rest, and forget about optimizing rewards from there.

Douglass: Yeah. A lot of people have difficulty maintaining a budget, even just tracking that. Why make it more difficult?