I heard something on the radio this morning that made me shake my head. It was a segment about tips on how to save more money. What came was a predictable list of "brew your own coffee," "buy generic products," and "bring your lunch to work!"

I can't stand these lists. I think they're dangerous, because the average American's dismal financial state has little to do with coffee, name brands, or lunch. The people writing these articles mean well. But they're the equivalent of telling a drowning man how to dry his clothes -- advice that seems helpful but misses the bigger problem.

Most workers reading this article earn enough money to be saving a lot of it. If you can't, it's likely because the gap between reality and your ego is larger than it should be. And if you dig into that gap, I think you'll find just three things:

• your house
• your car
• your education

If you want to actually save money, start there.

Your house
The average new American home now has more bathrooms than occupants. Nearly half have four or more bedrooms, up from 18% in 1983. While the median household's inflation-adjusted income has been stagnant for decades, the median new home's square footage has increased 38% since the late 1980s: 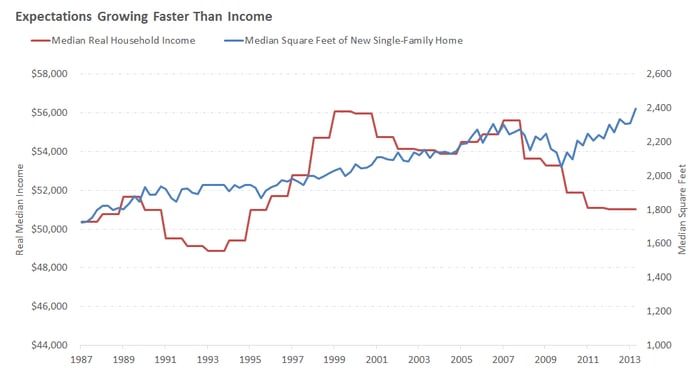 A lot of people I know think housing is expensive. But it doesn't have to be. What's expensive is when your expectations outgrow your income. You can live without two guest rooms, three spare bathrooms, and a two-car garage. You might need roommates. The average American could save a ton of money by realizing that their largest monthly expense is inflated expectations of what a decent house is.

Your car
The average amount borrowed for a car in 2013 was $27,000, according to Experian Automotive. For people with the lowest credit ratings -- typically lower-income families -- the average auto loan was higher, at $29,385. And that's just the loan amount. The average transaction at an auto dealership is now $32,160.

Experian's director of auto credit explained why these numbers are so high: "If you look at the most popular segments, they are full-size pickups and SUVs. It's hard to find one of those models new and fully loaded for under $30,000."

Here's your problem, America: You need a car to get to work. You picked one that can tow a boat and consumes two-thirds of a year's income.

Add in the cost of gas and this is probably where the average American can find the most savings in their budget. You can buy an excellent new car that gets 35 miles per gallon for less than $17,000. These cars come entirely stripped of prestige, but this is where saving money requires closing the gap between your ego and reality.

Your education
This mainly applies to young people, but there are a lot of you.

I shake my head when I read stories about low income young people stuck with $200,000 of student loans. What's frustrating is that the stories invariably blame the soaring cost of tuition on these debt burdens. But that's not really the problem. The problem is the student didn't do college the right way.

Unless you have generous parents or scholarships, almost no one should attend private college. It's totally unnecessary. Four years of public university isn't even necessary.

For most, there's an adequate and much cheaper way to go to college: two years at a community college, two years at an in-state public university.

Prices vary by state, but most people can go this route for less than $25,000 total and obtain a world-class education. It can save people tens, even hundreds, of thousands of dollars before they're old enough to drink.

This route isn't as socially thrilling as going to a private school for four years. But you're 18 and broke. The first test of whether you're mature enough to attend college is whether you can grasp financial reality with both hands.

House, car, education. Take care of those three and you can drink all the coffee you want.