What: Shares of clothing retailer Zumiez Inc. (NASDAQ:ZUMZ) fell 10% last month, according to data from S&P Global Market Intelligence, as the company reported weak comparable-store sales for April, and tracked with several other apparel retailers that got slammed on disappointing earnings reports. 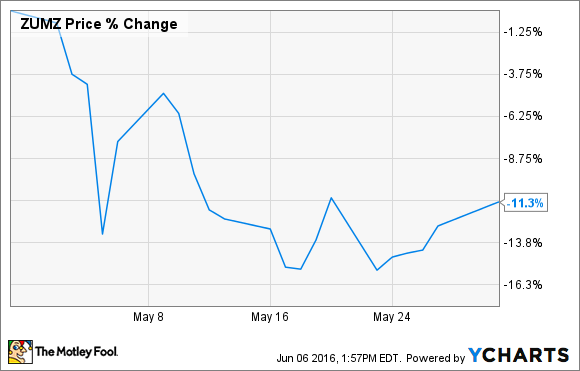 So what: As you can see from the chart above, Zumiez's worst day came on May 5, when the stock fell 9.3% following an underwhelming same-store sales report for April. For the 13th consecutive month, the surf-and-skate-themed retailer saw same-stores sales slide, falling 6% on 1.1% drop in overall revenue. Management also said it expected its first-quarter earnings per share to come in at the low end of its previously announced guidance of  -$0.11 to -$0.07. Management did not offer a comment on the month, but the results seem to speak for themselves.

The stock recovered briefly following that announcement, but declined again as peer retailers including Macy's and Gap Inc. posted their own dismal quarterly reports, showing that Zumiez's problems may be beyond its own control.

Now what: Zumiez reported first-quarter earnings on June 2, and the stock slipped 4% the next day. For the quarter, comparable sales fell 7.5% and the company reported a loss -$0.08 a share, down from a $0.09 profit a year ago. CEO Rick Brooks expressed long-term confidence in the business, but many of the company's closest competitors are struggling for survival. Pacific Sunwear filed for bankruptcy in April, and Quiksilver declared bankruptcy last year, and teen retailers like American Apparel and Aeropostale have also followed suit. Zumiez isn't facing a similar fate, and it's still expected to turn a profit this year, but the weakness of the business is apparent. As long as comparable-store sales keep falling, the company's long-term prospects remain in doubt.