What: Shares of Whole Foods Market (NASDAQ: WFM) rose 11.2% in May, according to data provided by S&P Global Market Intelligence. The company's fiscal second-quarter report on May 4th was mixed, with Whole Foods cutting its guidance for the full year, but an already beaten-down stock and the launch of the new 365 chain was enough to counteract the bad news.

So what: Whole Foods reported second-quarter revenue of $3.7 billion, up 1.3% year over year, but $40 million below the average analyst estimate. Comparable-store sales declined by 3%, driven by a 2.1% decline in the number of transactions and a 0.9% decline in basket size. The company did note, though, that the first few weeks of the third quarter showed improvement, with comparable-store sales falling by just 2.6%.

Whole Foods managed to beat analyst estimates for earnings, reporting EPS of $0.44. That's $0.03 better than analysts were expecting, and flat year over year thanks to share buybacks. The company used its earnings report to cut its guidance for the full year. Sales growth of 3% is now expected, down from previous guidance of 3%-5%.

Shares of Whole Foods have dropped considerably since early 2015, down about 50% from the 52-week high as of the end of April. The positive reaction to Whole Foods' earnings report may have simply been the result of extremely low expectations from investors. 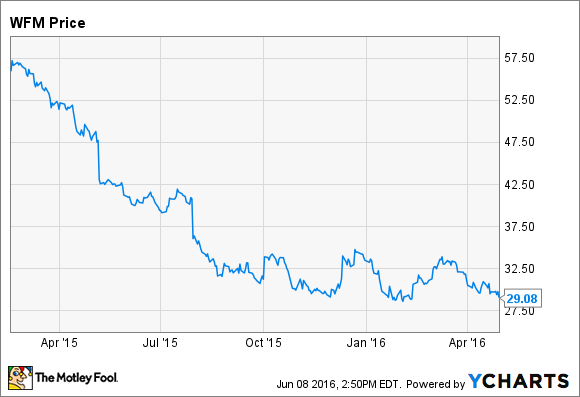 Now what: Another factor that could be responsible for the May rebound of Whole Foods stock is the launch of the 365 value-orientated chain. The first store opened a few weeks after the company reported earnings, and Whole Foods co-CEO Walter Robb had a lot to say about the effort.

Created to complement our Whole Foods Market stores, our new 365 format will offer our same industry-leading standards and dedication to food transparency in a streamlined format designed around affordability and convenience and supported by enhanced digital experiences. We believe there is customer demand for both formats, and as a second growth vehicle, 365 allows us to attack the value-quality proposition in a new way, while maintaining the integrity the Whole Foods Market brand represents in the marketplace.

The 365 format allows Whole Foods to enter markets where the larger Whole Foods stores wouldn't have worked. The success of the effort is far from guaranteed, but investors seem to be on board, pushing the stock higher in May.