The latest version of our ongoing better buy series pits two large biotechs -- Celgene (NASDAQ:CELG) and Biogen (NASDAQ:BIIB) -- against each other. In many ways, this comes down to a question of high-growth vs. value investing. Like most biotechs, both companies are down over the last year, but Biogen is clearly having a substantially worse year. 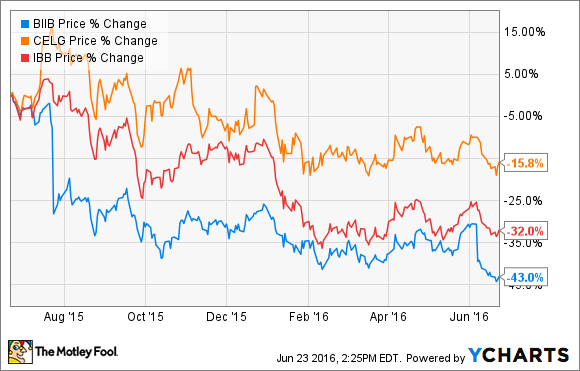 As you can see from the chart, many of the declines -- and the increases -- don't seem to be company-specific; you can see a lot of instances where both companies move with the rest of the industry -- measured by the iShares Nasdaq Biotechnology ETF -- as investors move in and out of the sector.

There are a couple of places on the chart above where Biogen clearly moves down more than Celgene: back in July of last year and, more recently, within the last month.

The move in July came after Biogen announced sales growth for its oral multiple sclerosis drug, Tecfidera, was slowing. Sales didn't actually go down, mind you, but the second quarter of 2015 saw sales of Tecfidera grow by 26% year over year compared to 63% year-over-year growth in the first quarter. Investors were counting on growth continuing at its stellar pace, so the valuation naturally had to come down.

More recently, Biogen announced that its pipeline drug, opicinumab, failed a phase 2 clinical trial. The drug was arguably a bit of a long shot, but since it had the potential to not only treat multiple sclerosis but reverse the progression -- and the potential blockbuster sales to go with it -- removing those risk-adjusted sales from the valuation caused a steep drop in the share price.

In contrast to Biogen, Celgene has had a relatively solid year, with its only downfall being that it's a biotech company. Even then, it's handily beat the industry index.

Investors are rightfully excited about data from at least 18 phase 3 clinical trials that Celegene expects to present between now and 2018. Many of those clinical trials are for already-approved drugs, but successful data would be used to gain additional approvals in larger markets, so the drugs can be used to treat patients longer.

Celgene also has a substantial pipeline of novel drugs, many of which have come through licensing deals, so it won't have to pay a bulk of the cost unless the drugs are successful. With the potential for 50 new products through 2025, Celgene doesn't need them all to be successful to see its share price rise. Management is guiding for a 23% compounded annualized growth rate for adjusted EPS between 2014 and 2020.

Celgene clearly has the better prospects, here, but investors have to pay up for the increased potential. Celgene trades at about 17 times estimated adjusted 2016 earnings, while you can buy Biogen for less than 13 times this year's estimated adjusted earnings.

Even with the premium price, Celgene is the better buy because the potential to increase earnings dramatically justifies the higher valuation. Admittedly, Biogen could still trounce Celgene over the long term if its Alzheimer's disease program works, but that's such a long shot that investors shouldn't be factoring it into their decision to buy Biogen.