Please ensure Javascript is enabled for purposes of website accessibility
Log In Help Join The Motley Fool
Free Article Join Over 1 Million Premium Members And Get More In-Depth Stock Guidance and Research
By Keith Speights - Nov 10, 2019 at 9:00AM

Which stock wins in a head-to-head matchup between these two big biotechs?

You probably won't find two bigger stories in the world of biotech in 2019 than those of Biogen (BIIB 0.85%) and Celgene (CELG). Biogen's lead pipeline candidate, aducanumab, appeared to be a total bust earlier this year, only to rise from the ashes last month with the biotech now planning to file for approval based on new data. Celgene started the year with a bang with news that it would be acquired by Bristol-Myers Squibb (BMY -1.86%).

Which of these two news-making biotech stocks is the better pick for long-term investors now? Here's how Biogen and Celgene stack up against each other. 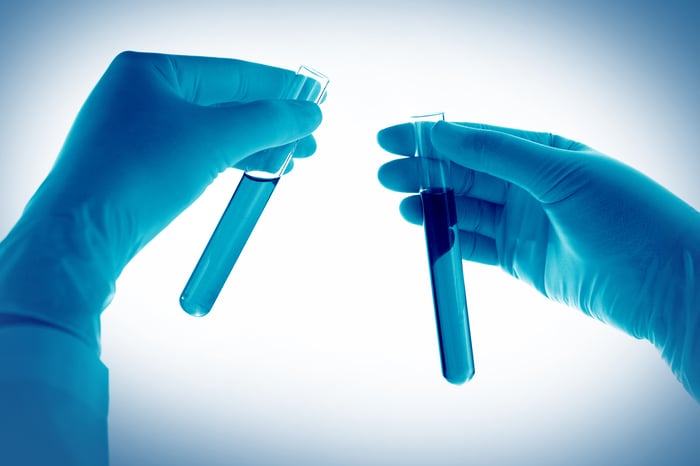 Biogen shocked the biotech world in October with its announcement of plans to file for FDA approval of Alzheimer's disease drug aducanumab. The drug seemed to have failed miserably in March after Biogen halted two late-stage studies based on the recommendation of the studies' independent data monitoring committee. However, the analysis of a larger data set from these studies has convinced the company that aducanumab has a viable path to approval.

Just two years ago, aducanumab was viewed as the most valuable pipeline program in the biopharmaceutical industry. If Biogen manages to win FDA approval for the drug, it anticipates peak annual sales of at least $5 billion and perhaps a lot more. The trick, however, is actually securing approval. Morningstar analysts think the probability of FDA approval is only 30%.

Biogen's fortunes aren't riding solely on aducanumab, though. The company's multiple sclerosis (MS) franchise continues to generate billions of dollars in annual sales. However, growth has tapered off in the face of new competition. Biogen hopes that Vumerity, its newly approved MS drug licensed from Alkermes, could rejuvenate growth.

Spinal muscular atrophy (SMA) drug Spinraza has been the brightest star in Biogen's constellation lately. Sales for Spinraza soared 17% year over year in the third quarter. While the growth rate for the blockbuster drug has slowed, predictions that Spinraza would lose significant market share to Novartis' Zolgensma haven't come true so far.

Biogen has also built a solid lineup of biosimilars that combined to generate nearly $184 million in sales in Q3. The company recently secured rights to two other biosimilars referencing blockbuster eye-disease drugs Lucentis and Eylea from its partner Samsung Bioepis.

Celgene shareholders have a nice potential bonus to look forward to as a result of the terms of the buyout deal with Bristol-Myers Squibb. Each shareholder will receive a contingent value right (CVR) share that entitles them to receive $9 per share if the FDA approves ozanimod, liso-cel, and bb2121 by specified dates. I suspect Celgene will win these FDA approvals quickly enough for the CVR shares to pay off.

With the BMS acquisition likely to close by the end of 2019, investors considering buying Celgene stock should look at the growth prospects that Celgene brings to BMS. Celgene already has a couple of blockbuster drugs generating strong growth with Revlimid and Pomalyst. Otezla is also a fast-rising star, but the immunology drug will be sold to Amgen to make antitrust regulators happy.

Celgene won FDA approval earlier this year for myelofibrosis drug Inrebic, which could be another solid winner. The company is awaiting approval for MS drug ozanimod, which should rake in peak annual sales in the ballpark of $5 billion if approved. Luspatercept won FDA approval on Friday for treating anemia in patients with beta-thalassemia. The drug could generate peak annual revenue of around $2 billion.

Then there's the rest of Celgene's pipeline. We've already mentioned cell therapies liso-cel and bb2121, both of which have blockbuster potential. The company also has high hopes for blood-disease drug CC-486. Further down the road, Celgene's cereblon E3 ligase modulator (CELMoD) drugs currently in early stage testing could extend the biotech's dominance in hematology.

The main knock against Celgene is that Revlimid will face generic competition in 2022. But the company's agreements restrict the volume of this generic competition for the first few years. That should give Celgene plenty of time for its other drugs and pipeline candidates to pick up momentum.

Meanwhile, BMS has some solid arrows in its quiver already. Market researcher EvaluatePharma projects that anticoagulant Eliquis and cancer immunotherapy Opdivo will rank as the world's No. 3 and No. 4 best-selling drugs, respectively, within the next few years. BMS also has other winners in its lineup, including autoimmune disease drug Orencia, immunotherapy Yervoy, and multiple myeloma drug Empliciti.

Biogen's shares would skyrocket if aducanumab wins approval. But with the odds seemingly against FDA approval of the drug and stiff competition for the company's MS drugs, I'm not sold on Biogen right now. In my view, Celgene is the better pick.

Celgene certainly has some pipeline risk. I think, though, that the biotech will land approvals for the candidates that it's really counting on -- ozanimod, liso-cel, and bb2121.

The addition of Celgene's current drugs and pipeline programs to BMS should make the combined entity an attractive choice for investors, especially in light of the big pharma company's healthy dividend. Celgene will almost certainly soon disappear as a stand-alone entity, but I think that buying the stock now will pay off for investors over the long run.