Please ensure Javascript is enabled for purposes of website accessibility
Log In Help Join The Motley Fool
Free Article Join Over 1 Million Premium Members And Get More In-Depth Stock Guidance and Research
By Keith Speights - Jul 23, 2017 at 7:27AM

Biogen, Johnson & Johnson, Lilly, AbbVie, and Celgene could have huge winners on their hands in the near future.

That's how much market research firm EvaluatePharma projects the five most valuable pipeline candidates are worth right now. The firm calculated the net present value (the current value of potential future sales) of all the experimental drugs in biopharmaceutical companies' pipelines for which sales forecasts are available, then ranked them. 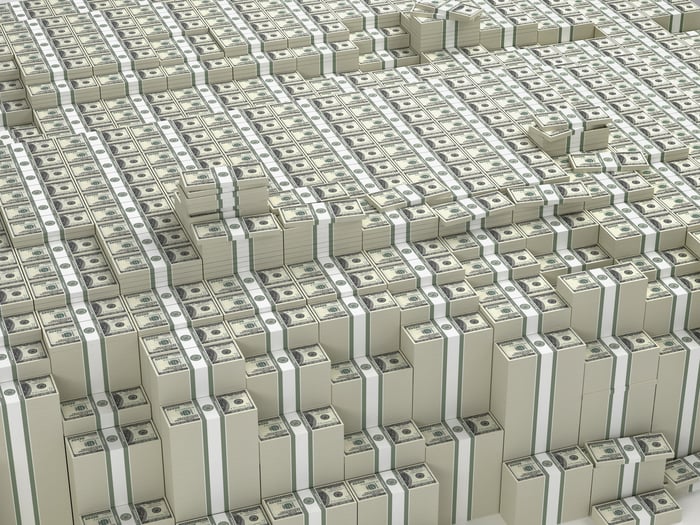 EvaluatePharma estimates that the net present value of Biogen's aducanumab is $10.2 billion. Biogen is currently evaluating the experimental Alzheimer's disease drug in a late-stage study. Aducanumab is a monoclonal antibody that binds to amyloid plaques in the brain and could reduce these plaques, potentially slowing the progress of Alzheimer's disease.

While there have been numerous failures with other experimental Alzheimer's disease drugs, aducanumab could be the most promising treatment so far. In December 2016, Biogen reported positive results from a phase 1b study that showed slowing of the progression of Alzheimer's disease in patients who took aducanumab.

A net present value of $9.8 billion was calculated for Johnson & Johnson's apalutamide. The drug is in multiple late-stage studies targeting treatment of prostate cancer, including one study in combination with J&J's Zytiga.

Johnson & Johnson picked up apalutamide (also known as ARN-509) with its 2013 acquisition of Aragon Pharmaceuticals. J&J expects to submit its first filing for approval of the drug within the next year and could have three other submissions by the end of 2021.

Eli Lilly's abemaciclib received a net present value of more than $8.8 billion from EvaluatePharma. The experimental drug is being evaluated in late-stage studies for treatment of non-small cell lung cancer and breast cancer. Lilly is also exploring the potential for abemaciclib in treating pancreatic cancer and squamous non-small cell lung cancer in phase 2 studies.

The FDA recently granted priority review for Lilly's new drug application for abemaciclib in treating breast cancer. An approval decision is expected in the first quarter of 2018. Lilly also plans to file for regulatory approval of the drug in Europe and Japan in the second half of 2017.

Rova-T is one of several late-stage cancer drugs in AbbVie's pipeline. It could be the most valuable of the bunch, according to EvaluatePharma, which pegs the net present value for Rova-T at nearly $8.5 billion.

AbbVie scooped up Rova-T last year with its buyout of Stemcentrx. The drug is currently in a phase 3 study as a first-line treatment for non-small cell lung cancer and is in a phase 2 study as a third-line treatment for the indication. AbbVie's management highlights Rova-T as one of the top assets in the biotech's pipeline and is looking to expand the drug's opportunities through combination studies with immuno-oncology therapies.

Celgene's ozanimod ranks as EvaluatePharma's fifth-most valuable pipeline candidate, with a net present value of nearly $8.2 billion. Ozanimod is being evaluated in two late-stage studies, one targeting relapsing multiple sclerosis and the other targeting ulcerative colitis. The drug is also in a phase 2 study for treatment of Crohn's disease.

Like AbbVie and Johnson & Johnson, Celgene added ozanimod to its pipeline as a result of an acquisition -- in this case, the 2015 buyout of Receptos. Celgene has a tremendously promising pipeline, but ozanimod looks to be one of its brightest stars. If it's approved for all three indications, the biotech thinks the drug could generate peak annual sales between $4 billion and $6 billion.

Every one of these pipeline candidates holds the potential to be a huge success story. In several cases, the drugs could be worth a lot more over time than the net present values calculated by EvaluatePharma.

On the other hand, any of these drugs could also stumble in clinical studies or in the regulatory approval process. A major setback could dramatically reduce the value of any of these candidates. Out of all of these drugs, I'd say that Biogen's aducanumab has the potential to be much more valuable than EvaluatePharma calculates -- or to be a total bust.