As a subscription-model business with most of its big capital expenditures in the rearview mirror, Sirius XM Holdings (NASDAQ:SIRI) is a business that can generate a lot of cash and do so reliably.

Over the past three years, it's been using that cash to buy up its own shares. But that may be about to change, and the alternative may be a dividend.

Sirius CFO David Frear touched briefly on the topic earlier in June, when he spoke with analysts at the Bank of America-Merrill Lynch Global Telecom Conference.

Frear told analysts that the "company's economics set up well as a dividend story," and he hinted that the time to consider making that move is drawing nearer.

"It didn't make a whole lot of sense to start capital returns with dividends when we were talking about it back in 2012," Frear said.

The company issued a $0.05 special dividend that year -- ahead of an anticipated tax increase -- saying that the payout "reflects the board's desire to return value to stockholders and its confidence in the long-term growth prospects of our business."

It's been the only dividend paid to date.

Although the company was generating $709 million in free cash by that year, it was limited in how it could use that cash by the covenants of its debt agreements. It also had some 6.8 billion diluted shares in circulation.

So while Sirius saw itself as an eventual dividend story then, it made little sense to try to tell that story to analysts and investors knowing that the dividend was probably still several years away, Frear said.

"It's just a tough story to tell," he said in June.

A company invests in itself

Instead, it put its money to use in a few important ways: buying back shares, entering the connected-vehicle services market, and investing in its programming.

Sirius XM committed to a $2 billion share-buyback plan that year, and it upped that amount each year after. By 2015, the plan had grown to $8 billion.

With subscription revenue continuing to grow at a healthy pace of around 8% annually, the company generated $1.3 billion in free cash flow last year -- double what it did in 2012.

As a result, we can see how cash flow per share has climbed over the past five years: 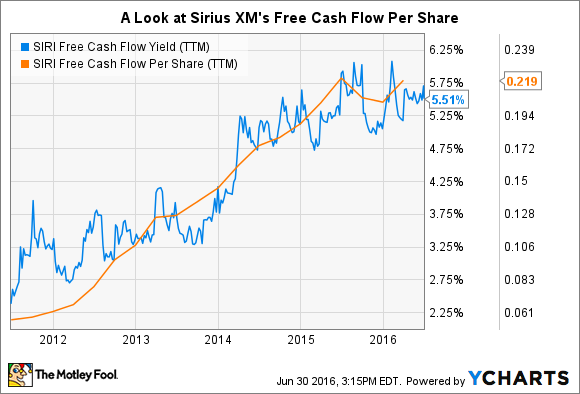 In returning cash to investors through only buybacks, Frear acknowledges that Sirius now finds itself in an unusual situation. He said he expects discussions with the board of directors regarding "the role of buybacks and dividends," and he noted that the ultimate decision will be up to the board, not management.

"And we will see where that story takes us," Frear concluded.

If Sirius was reluctant to tell its own story as a potential dividend payer, it's at least less so now. Consider Frear's comments a teaser.

How much could it pay?

Determining how much Sirius could return to investors as a dividend will depend on how much free cash the company wants to continue allocating toward buybacks and other investments.

But as we can see from the free cash flow yield numbers in the preceding chart, it would be possible for the company to issue a sizable distribution upwards of 5%.

Measuring by net income, as some investors prefer, a 100% payout would yield 3% at June 29 share prices.

While it's unlikely that Sirius would declare an opening dividend at 100% of either net income of free cash flow -- or probably anywhere close – the company's economics do, indeed, support an attractive yield at today's prices

How soon that dividend will arrive is still anyone's guess. But now that a top executive has broached the topic, we can expect it to come up again, and probably soon. Investors will want to stay tuned to that discussion. A dividend would begin a new story for the satellite-radio company -- and one that should be enticing to investors.